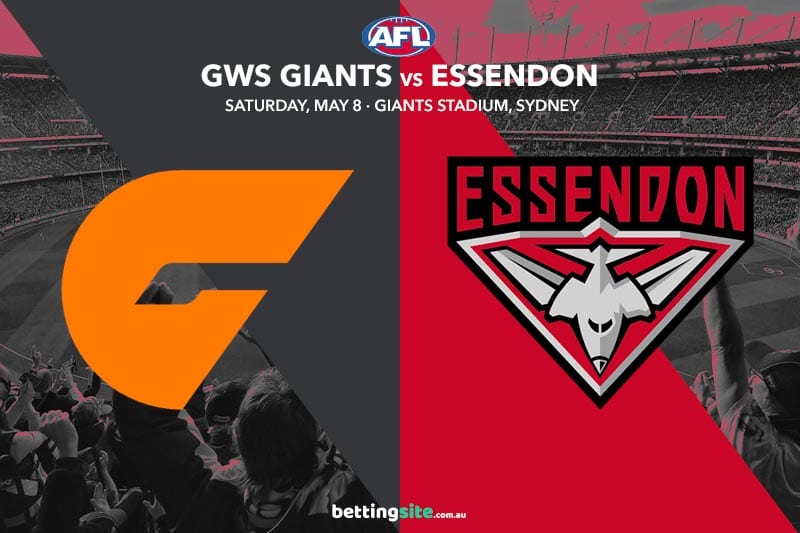 The GWS Giants return to the home deck of GIANTS Stadium for the first time since Round 1 to host the under siege Essendon as the 2021 AFL season continues on Saturday afternoon.

The Giants have bounced back in fine style over the past month, winning three of their last four, and their one loss in that stretch came against the red-hot Western Bulldogs.

Ben Rutten and his young Essendon side will head interstate looking to end a run of seven straight losses outside of Victoria and will need to be at their very best to go with the Giants, who have seemingly recaptured their mojo.

Online bookmakers have GWS at odds of $1.45 to continue their impressive form, whilst Essendon have been marked at $2.90 ahead of this intriguing matchup.

In their last two matches against each other, these two sides have put in a couple of deadset thrillers. The Giants got the better of the Bombers last year thanks to a massive second half, whereas in 2019 it was the Dons who prevailed under the roof of Marvel Stadium with thanks to a Cale Hooker masterclass late in the fourth quarter.

The Giants come into this matchup with three wins and four losses to their name following a massive win against the Crows last weekend at the Adelaide Oval. Essendon, on the other hand, have just two wins for the year and will be smarting after their loss to Carlton in an old-fashioned shootout last Sunday.

It is hard to believe that Shane Mumford is still playing a crucial role for the Giants. The big Mummy had forecasted in the pre-season that he would only play half a dozen games this year, but it looks like he will have to revise that estimate. Mumford has been instrumental in all three matches he has played in for the club this year, with the Giants proving victorious in all three, whereas GWS have lost every game the veteran ruckman has missed.

Young Nick Bryan made his debut against Carlton last weekend and did not look too bad up against the brawny Marc Pittonet. Mumford is a similar type of ruckman to Pittonet, but if the Dons are to have any chance against the Giants, Bryan will need to nullify the smarts that Mumford has shown this year.

There was plenty of pressure mounting on GWS coach Leon Cameron after the first few weeks of the season, but the Giants have bounced back in style with three wins in their last four games. The inclusion of Lachie Whitfield last week against the Crows showed just how important the former no.1 draft pick is to the GWS lineup. With he and Lachie Ash off the half-back line, a rock-hard midfield and a star-studded forward line, the Giants look to have Essendon covered all over the ground.

Harry Himmelberg has kicked three or more goals in 12 of his 88 games, including last week against Adelaide. With the inclusion of Jesse Hogan, and the stardom that comes with Toby Greene, Himmelberg is a real chance to get off the chain against Essendon on Saturday. With an undermanned Bombers backline, expect Himmelberg to flex his muscles and prove hard to contain.

We are expecting perfect conditions in Sydney on Saturday afternoon, which should favour the highly skilled Giants side. Lachie Whitfield and Jesse Hogan returned in fine form last weekend, and they will only be better for the run. Throw in the injury-hit Essendon lineup, and the Giants should make it four wins in five matches and put the rest of the competition on notice.