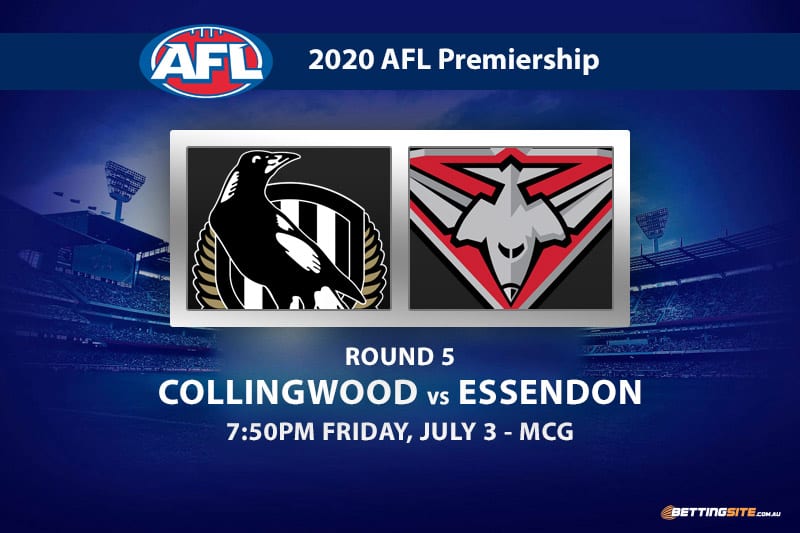 ANZAC Day rivals Collingwood and Essendon will pay tribute to Australia’s armed forces with this big Friday night battle at the MCG.

Suspensions will play a big part in this clash; Zach Merrett has been ruled out for the Bombers, while Steele Sidebottom and Lynden Dunn breached COVID protocol during the week and are awaiting their punishments.

Both teams are coming off heartbreaking losses in round four, with the Magpies going down to the GWS Giants by two points and the Bombers losing to Carlton by just a single point in gut-wrenching fashion.

All eyes will be on the Pies come selection time as they need to find a replacement for injured defender Jeremy Howe and the red-hot Sidebottom. Adam Treloar will come into the midfield, but the defensive spot is still up in the air.

Conor McKenna has been released from quarantine and will be ready to play this weekend, bringing much-needed pace to the Essendon back six.

With wet weather expected to impact the game severely, could we see a replay of the famous 2009 battle where David Zaharakis saved the Bombers at the death?

Brodie Grundy is Collingwood’s fourth midfield at the centre bounce, as his ability to compete at ground level rivals even the most tenacious rovers. Essendon has to make a big call on whether to stick with Tom Bellchambers or bring in Andrew Phillips for his club debut, but it is unlikely that either ruckman can match Grundy around the ground.

Essendon’s primary scoring tactic is to rebound from half-back as quickly as possible, which tends to work best when the ball is in Adam Saad’s hands. The former Gold Coast star has troubled the Pies in the past and could be very dangerous if there is any rain about. Wet weather often benefits players like Saad that demand the ball, run like the wind and kick it long.

An interrupted preseason has hampered Jaidyn Stephenson’s progress in 2020, but now that he has two games under his belt, the young forward looms as a serious scoring threat. The 2018 AFL Rising Star had four shots on goal in the first quarter against the Giants, but he dropped off badly after the main break. If he runs out four quarters this week, the Dons will have their hands full.

With Jeremy Howe out injured and Lynden Dunn expected to cop a ban, Collingwood will have to scramble to find a matchup for Jake Stringer. As the most productive forward on either side this season, it’s likely Stringer lifts for the occasion and puts through a couple of goals for the Dons.

Wet weather and tight defensive structures do not equal high scoring. Even though the 114-point mark feels very low, both teams have already played games well under that total in dry weather. Collingwood will field a strong back six despite Howe’s absence, meaning the Pies could hold Essendon below 40 points for this contest.

The inclusion of Adam Treloar is massive for the Collingwood midfield, as the 2018 ANZAC Medal winner has made a habit of racking up big numbers against the Dons. Even if Sidebottom is suspended, the Magpies are going to be hard to beat and could push the winning margin beyond four goals this Friday night at the MCG.