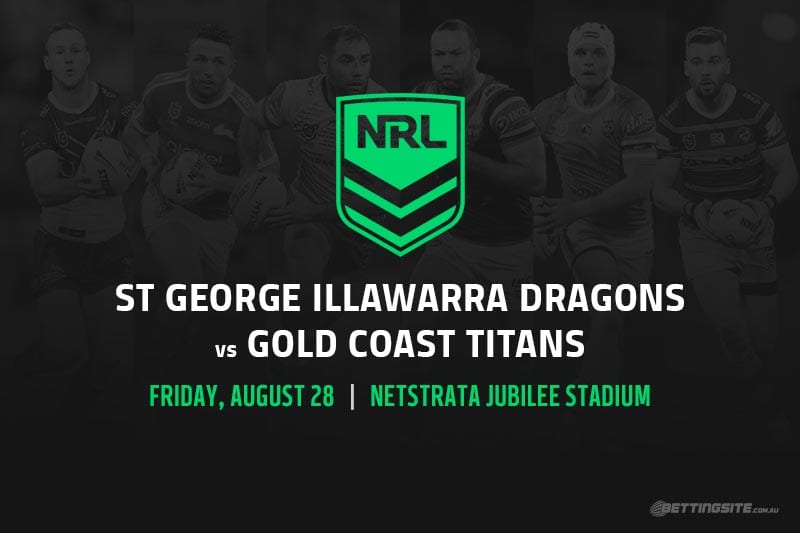 No one was expecting a fun game when the St George Illawarra Dragons met the Broncos last Friday night, so should we shift our expectations for their upcoming clash with the Gold Coast Titans?

The Saints are gunning for a third win in a row and look every chance to tick off that milestone at the short price of $1.33.

The Titans had put together a month of competitive footy before they were blown away by the Raiders at home last start, and the $3.70 for them to come to Sydney and upset the Dragons should be longer.

St George Illawarra’s attack has been fantastic in games against fellow teams outside the eight, scoring 20 or more points in all such contests since round five.

The Titans lost the corresponding fixture on the Gold Coast by 12 points, so the -8.5 start given to the Dragons is a more than realistic outcome.

The over/under of 44.5 should also be taken care of, with clear conditions forecasted for the 6pm Friday kick off.

When it comes to scoring tries, has there been a better winger in the last fortnight than Mikaele Ravalawa?

He has scored a double in his past two games and is now just two tries back in the race for the leading tryscorer award.

With Matt Dufty having a love affair with the right side of the field, Ravalawa is well worth a look to score two or more tries against the porous Gold Coast defence.

Phillip Sami and Anthony Don are always at the head of the lis for the Titans in the tryscorer betting, but the exciting AJ Brimson looks a good option for anytime scorer in a same-game multi.

Best bets for Dragons vs Titans