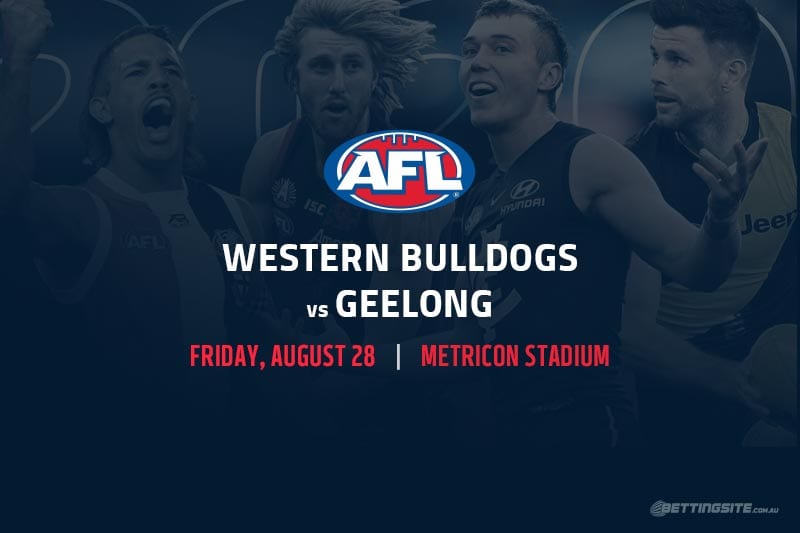 Round 14’s Friday night clash between the Western Bulldogs and Geelong Cats will bring a finals-like intensity to Metricon Stadium.

The Bulldogs must win this game to make sure they remain inside the top eight, as Melbourne, Carlton and the GWS Giants are all only four points back.

These sides faced off twice in 2019 and each came away with a victory, but it was the Bulldogs who won the most recent battle by 16 points.

A number of players for both sides will go through fitness tests this week, including Joel Selwood, Zach Tuohy and Jack Steven for the Cats and Matthew Suckling, Zaine Cordy and Taylor Duryea for the Doggies.

He is only in his second season of AFL footy, but Bailey Smith is already a certified star. The feisty midfielder had an off day against the Brisbane Lions in round 11, but he bounced back with 37 touches a week later. Smith had a breakout performance in his rookie season against the Cats with 28 touches, and we’ll back him to shine again this week.

The Coleman Medal betting favourite has kicked 22 goals in his last six matches, including five games with three or more. The key defenders for the Western Bulldogs love to intercept the ball, but they lack an outright stopper that can match Tom Hawkins for size and strength. If the Cats move the ball quickly and get their star forward in some one-on-one contests, he could kick a few.

When the Western Bulldogs have lost in 2020, the margin has often blown out beyond expectations. However, with their season on the line and their fittest list in weeks, the Dogs will take it to the Cats and could even pinch this game. You simply cannot rule out Geelong though, which is why we have taken the Bulldogs at the line.