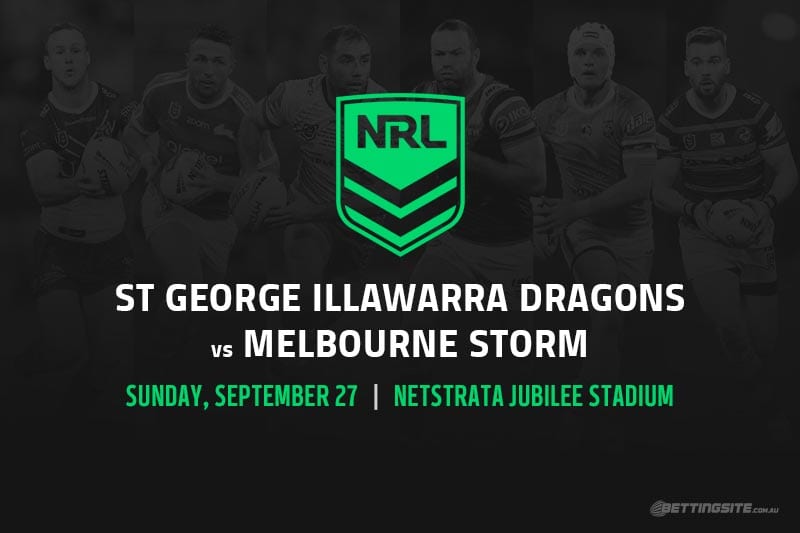 Much like the Sharks vs Raiders game, the market on this one was temporarily suspended when the teams were announced.

If you were one of the fortunate punters who got on the St George Illawarra Dragons at $9 before their odds were slashed, best of luck to you.

The Saints were nothing short of horrible in their game against Newcastle last start, but they’ll never get a better chance to defeat the Melbourne Storm.

Craig Bellamy and co. have rested 12 regulars in the lead up to the NRL finals, where a win in week one would mean their stars have played only one game in three weeks.

Much has been made of this decision, but they’ve earned the right to rest guns and blood players who haven’t even been able to play reserve grade this season.

The $2.08 price on Melbourne is very tempting, but no doubt a huge chunk of the money for this game will go towards the Saints at $1.82.

Nothing in the Dragons’ last month of footy suggests they should be favourites other than the fact the Storm are playing unknowns like Aaron Pene and Chris Lewis.

But the Saints are handing debuts to Jayden Sullivan at five-eighth and Eddie Blacker on the interchange bench, so they are no morals to win.

The Storm only lost 14-0 to Parramatta when missing the bulk of their team, so there is good chance you could double your money by taking them in the head-to-head stakes.

Ryan Papenhuyzen at $12 to score the first try is also going to get plenty of attention, with his speed around the ruck likely to cause big problems for the Saints.

You only need to see how easily Chris Randall sliced them open last week in the fourth minute to realise Papenhuyzen could do the same.

Best bets for Dragons vs Storm