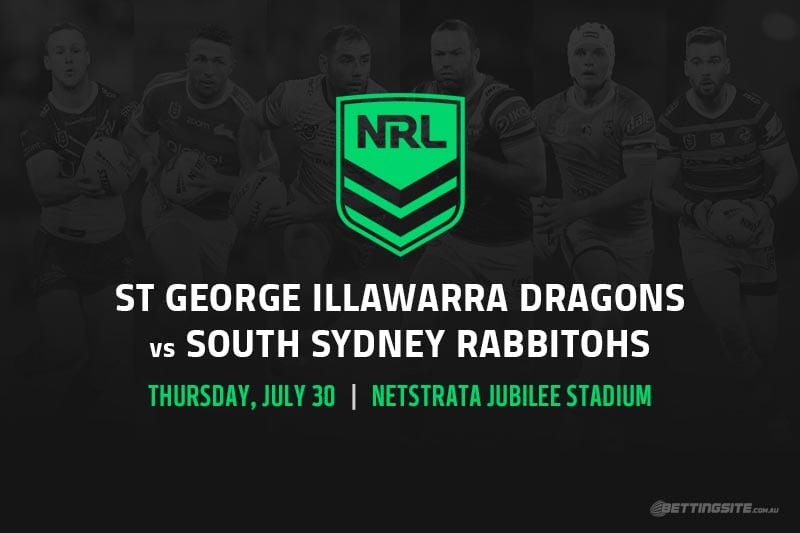 When you talk about important games for NRL clubs, this contest shapes as a four-point swing for the winner.

The St George Illawarra Dragons were on the wrong end of a classic derby against Cronulla, which leaves them in 11th spot and four points adrift of the top eight.

Should the Saints win against the South Sydney Rabbitohs this Thursday, they will join the Bunnies in the fight for finals football in 2020.

If the Dragons lose, however, they would potentially find themselves four points away from 10th spot should the Tigers do the job over the Warriors.

It’s rare that a team’s season goes on the line in round 12, but this is where St George Illawarra now sit.

They have the better form coming into this clash, but Souths will get Latrell Mitchell back from suspension and their record against teams lower than them on the ladder is first class.

They defeated the Titans, Bulldogs and Warriors comfortably but struggled for big parts of their recent games against Newcastle and Canberra.

The Rabbitohs had enough ball in the second half last week to win two games, especially as the Raiders continued to run out of able-bodied rugby league players.

Considering the form line of the Dragons, the $2.50 on offer is an excellent price for an underdog playing at home.

The line of 4.5 indicates it should go down to the wire, and you’d have to be tempted into taking the Red V at the +4.5 if you think they can get the job done.

Zac Lomax is hard to ignore in the tryscoring markets, with the local junior producing some scintillating form for St George Illawarra in recent weeks.

Souths may have to move Corey Allan to fullback, which would mean more disruptions to their left edge, so it may well be worth getting Lomax into your multis as an anytime tryscorer, or you can go the whole hog and put him down to score first.

Best bets for Dragons vs Rabbitohs