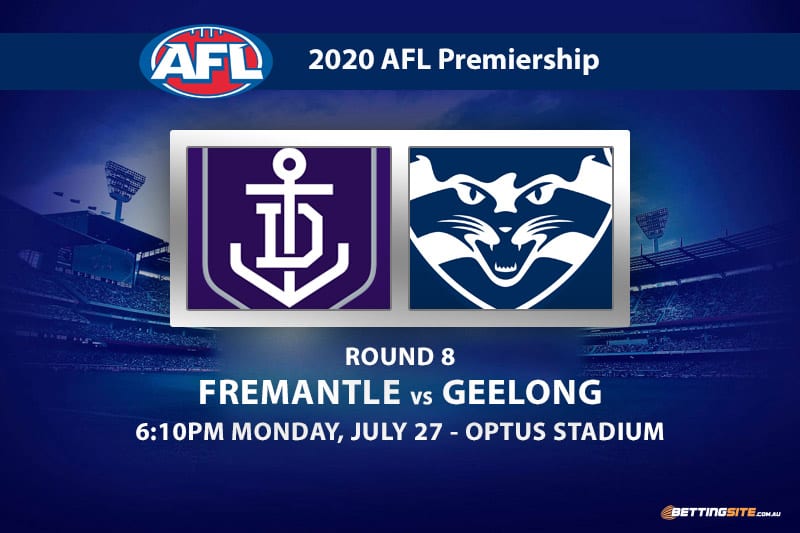 Monday night football will become a staple in what remains of the 2020 AFL Premiership season, and round eight’s clash between Fremantle and Geelong at Optus Stadium is one to watch.

The Dockers are 15th on the ladder with only two wins, but their stunning comeback against the Saints two weeks ago showed they can match any side on their day.

Two-time Brownlow Medal winner Nat Fyfe is still yet to prove his fitness after re-injuring his hamstring, while Mitch Duncan and Tom Stewart make a much-needed returns for Geelong.

Gary Ablett made the decision earlier in the week to leave the WA hub and return home to his young family, meaning the Cats need to find some forward magic elsewhere this Monday.

Joel Selwood also injured his hamstring in Geelong’s loss to Collingwood last week, so there are some big decisions to be made at the selection table.

The last two matches between these teams were very memorable, albeit for very different reasons.

The Cats kicked a record-breaking 23 consecutive goals in a 133-point win over Freo in 2018, but the Dockers got their revenge last year with an upset victory at Optus Stadium.

We have taken the punt on Andrew Brayshaw a few times this season and he has pulled through for us each time. When Fyfe went down and left a spot in the midfield, Brayshaw stood up and covered perfectly. The young bull will have a good chance to win the ball in the middle with Joel Selwood missing for the Cats.

With no Ablett or Selwood by his side this week, Patrick Dangerfield needs to shoulder the midfield work and carry the Cats to victory. Dangerfield had 26 and 32 disposals in the games he played when Mitch Duncan was out, showing he still has the ability to go up a gear when his side needs a hero.

We have seen a lot of players go through purple patches during games, but Matthew Taberner was on another level against the Eagles in the opening quarter last week. Taberner was marking everything and kicked two early goals, although he dropped off as the game went on. Still, that display suggests he can capitalise early if the Cats don’t get their matchups right.

Esava Ratugolea is a great athlete who thrives in the air and provides a big target inside 50, but he needs to work on his kicking. The Freo back line is smaller than average and relies on intercept marking rather than one-on-one dominance, so Esava will have a distinct physical advantage. The chances will come, but can he put them away? We think so.

A majority of both these teams’ matches have gone under the total points line, and we can see this one going in a similar direction. Although the Cats are the best team on offence, they may struggle with Fremantle’s style and the absence of their skipper.

Even without Joel Selwood and Gary Ablett, the Cats have enough strong players across the ground to defeat the Dockers. Tom Stewart is a very important inclusion in Geelong’s back six, as the two-time All-Australian controls the defence well and is strong in one-on-one contests.