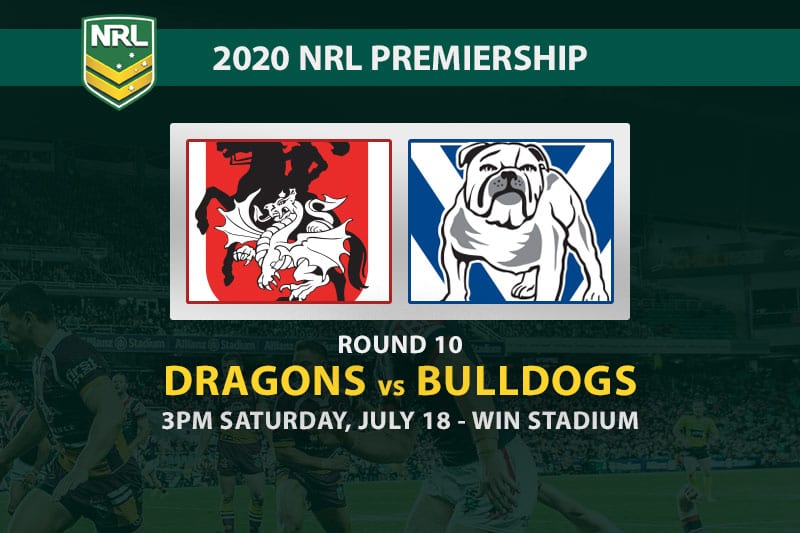 In the corresponding fixture in round four, it appeared the losing coach would get the sack.

Paul McGregor was well and truly under the pump after the St George Illawarra Dragons went down 22-2 that day, but he escaped the axe and the Saints have slowly but surely turned the corner since.

With a win this weekend, they will be just one win outside the top eight. If you had said six weeks ago that would be the case, you’d be watching this game from an asylum.

The Dragons play their first game this year at WIN Stadium down in Wollongong and head into the clash as $1.32 favourites.

The Canterbury Bulldogs have gone from bad to worse to worst in the past few weeks, leading to the resignation of coach Dean Pay earlier this week.

These Doggies are proving to be one of the worst attacking teams of the modern era, as they are averaging a measly 10 points per game this season.

The Dragons were held tryless in the first two games of the competition resumption, but they have averaged 22.4 points in their five games since and won three of them.

Fresh off scoring 34 points over the Sea Eagles, the Red V should feel confident they can do the same this Saturday and take one step closer to the top eight.

The over/under line is set at 37.5 points, but few punters will have any confidence in the pitiful Bulldogs attack contributing a great deal to that.

Some NRL betting sites are paying as much as $2.25 for the Saints to win by 13+ points, and even the team’s biggest detractors should feel confident they can cover that.

On the Canterbury side, Luke Thompson has shown glimpses of what fans can expect from the super-athletic Englishman, but it won’t be enough to swing the match in their favour.

The $21 for Ben Hunt to cross first is a tantalising offer given his switch of position and playing closer to his best each week, while the $15 on offer for Dallin Watene-Zelezniak is also tasty due to his excellent finishing abilities.

Best bets for Dragons vs Bulldogs