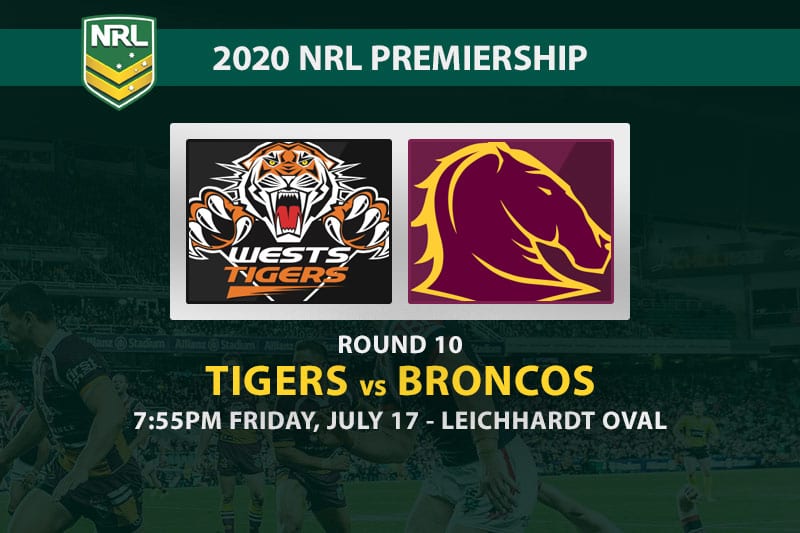 Wests Tigers coach Michael Maguire showed earlier in the year he isn’t afraid of dropping big names, and this week it’s star halfback Luke Brooks who has been replaced following the loss to the Rabbitohs.

He will remain on the interchange bench with Billy Walters set to get the start in the halves as ‘Madge’ looks to find an answer to his side’s defensive problems, especially on the left edge.

The Tigers showed once more last week they just don’t quite have enough in the tank to consistently beat the good teams, but now they have a big opportunity against the lowly Brisbane Broncos.

Wests will start as the $1.54 favourites as they return to Leichhardt Oval for the first time since conceding 42 points to the Knights there in round two.

The over/under is set at 36.5 points, which makes it tricky to predict, but the overs is a chance with no rain forecasted for Friday night.

Wests have scored at least 20 points in all games against bottom-eight opponents this season, including 30 or more in their last two such outings.

Brisbane should have a bit more confidence heading into what is a pivotal fixture in the context of their season.

While their 18-point win in round nine came at the expense of the hapless Bulldogs, the simple fact they got the winning feeling should mean a better preparation and a free mind come kickoff.

As they await the return of David Fifita, the 33-year-old Ben Te’o will earn his first start in top grade since the 2014 NRL Grand Final.

Xavier Coates appears to be the punters’ choice to score the first try, and you can still get as much as $13 for the Broncos winger to notch the opener.

After a long dry spell, Corey Oates was the first tryscorer last week in his new position on the second row. Running at the troublesome left edge of the Tigers, he is good value at $23 for the first and $5 to score any time.

The $3 on offer for Tigers 1-12 as they look to cement a place in the top eight also looks a good shout.

Best bets for Tigers vs Broncos