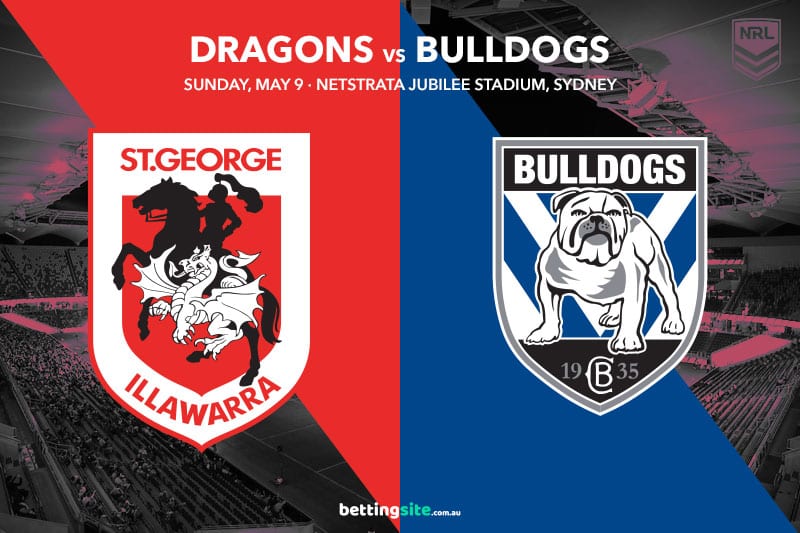 Three straight losses for the St George Illawarra Dragons has their 2021 NRL season on the slide, but they get the perfect chance to get back in the winners’ circle in round nine when they take on the Canterbury-Bankstown Bulldogs. Despite their outsider odds, the Bulldogs would have to think they are some chance of causing the upset. The Dragons managed to score just eight points against the worst defensive team in the competition in their last start, while the Doggies ran into the electric Eels and were dealt a lesson. Should the Dragons lose this contest, the panic may start to creep in.

All too often in their history the Dragons have been the April premiers and seen their season slide from this point, so if they don’t get the job done this week, the chokers tag will return. Ben Hunt will play his second game back and as a result their attack should be more fluent, and we think the $3.50 for him to score at any time should be taken up. No Zac Lomax or Mikaele Ravalawa means the Red V are missing some strike power out wide, so it leaves Matt Dufty at $1.80 to do the heavy lifting in the anytime tryscorer. The Dragons’ last five home games against the Bulldogs have all gone over the total points line, so that is one option to consider for your multi bets.

Nick Cotric at $13 to score the first try is well worth a look due to the defensive mismatch between Corey Allan and Tyrell Fuimaono (more on that later), but Adam Elliott at $31 as the roughie might be the best play for the Canterbury Bulldogs. Elliott loves to run a hard line from outside-in, and close to the line he is hard to handle. The Bulldogs don’t have much going for them in 2021, but they should feel as though this is a game they can pinch from an old rival. The +10.5 line at $1.90 has to be considered.

Corey Allan is the incumbent Queensland fullback, so why he isn’t there for the Bulldogs is a bit of a mystery. Instead, he lines up at centre opposite Tyrell Fuimaono, who has been terrific as a middle forward this season and is out of position for this game. Allan has fast hands and can set up his outside man with ease when he has a fraction of space, which is why Nick Cotric looks a good shout for first tryscorer.