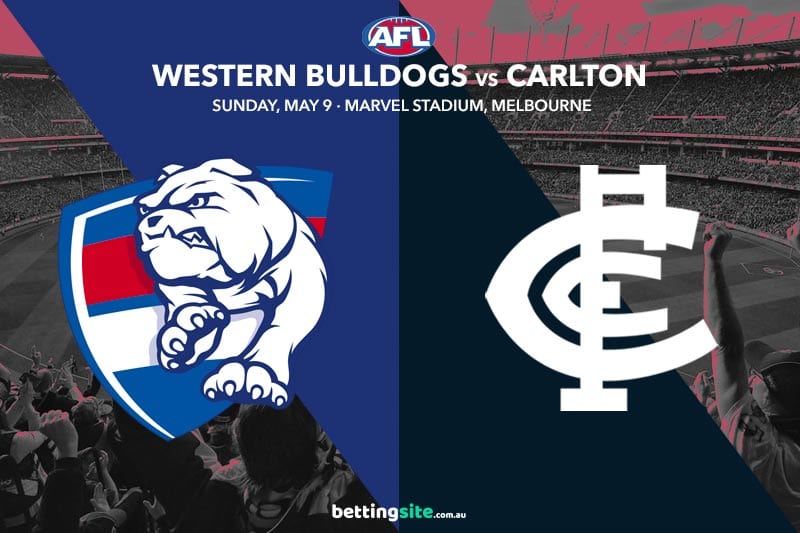 The Western Bulldogs will host Carlton under the roof at Marvel Stadium in the pick of Sunday’s matches in Round 8 of the 2021 AFL Premiership.

Luke Beveridge’s men were brought back down to earth in Round 7 when Richmond flexed their muscles and showed that the Dogs still have plenty of question marks down back.

Carlton, on the other hand, prevailed in a shootout against Essendon at the MCG last weekend as young stars Sam Walsh and Harry McKay continued their fine form.

Online bookmakers have the Western Bulldogs as $1.33 favourites, whilst Carlton look to be a shade over the odds at $3.75.

The Dogs come into this matchup after kicking their lowest score (55) in 20-minute quarters since Round 19, 2018. They were taught a lesson in team defence last weekend when failing to contain Tom Lynch and Jack Riewoldt, whilst their key forwards – outside of young gun Aaron Naughton – were null and void. With Carlton’s Harry McKay in career-best form, the Doggies backline will need to be on their game; otherwise this looks a match where the four points can head home with the underdogs.

Carlton will come into this matchup with an added confidence after getting the better of Essendon last weekend at the MCG. McKay was ably supported by his small forwards with Eddie Betts, Matthew Owies and Lachie Fogarty combining for eight goals between them. If the Blues crumbers and attacking midfielders can hit the scoreboard on Sunday, it will take them a long way to causing an upset.

Remarkably, both Alex Keath and Harry McKay are only playing their 56th matches at the top level. Keath had his colours lowered against Tom Lynch last weekend and now comes up against one of the AFL’s form forwards. With 26 goals to his name from the first seven matches, McKay is the key to whatever Carlton manage to put on the scoreboard. He is yet to go goalless in any game this year, and having kicked more than four goals on four occasions, it will take a Herculean effort for Keath to contain McKay this weekend.

As is often the case when an undefeated team suffers its first defeat of a season, people’s expectations lower for them from that point onwards. The Dogs certainly have some issues down back, but they should be too good over four quarters for this inconsistent Carlton lineup. Led by the likes of Marcus Bontempelli, Adam Treloar and Jack Macrae, the Dogs will have too many answers for whatever questions the Blues pose.

Aaron Naughton is yet to kick fewer than two goals in any of his seven matches this year, but he has only kicked three or more goals on two occasions thus far. Carlton will need to be at their best to contain all of Naughton, Josh Bruce and Tim English on Sunday, so we expect one of them to get off the chain. If he kicks straight, Naughton could be set for a bag on Sunday afternoon.

Having failed the litmus test that is Richmond, the Western Bulldogs looks set to bounce back with a strong performance against the up-and-down Blues. With a star-studded midfield and a forward line that looks hard to contain, the Western Bulldogs should cover the line in what looks to be a high-scoring match under the roof at Marvel Stadium.