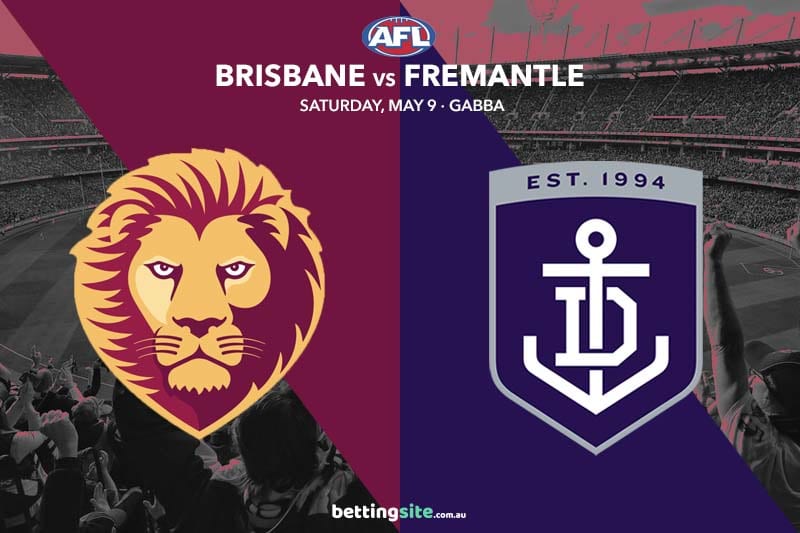 Round eight of the 2021 AFL Premiership season comes to a close with the Brisbane Lions hosting the Fremantle Dockers at the Gabba on Sunday.

Due to worrisome covid-19 figures in Western Australia, this match was relocated from Optus Stadium to the Gabba, taking away the Dockers’ home-field advantage and handing it to the Lions.

Fremantle’s round seven Western Derby did not eventuate as planned, as the Dockers conceded the final seven goals of the match after suffering a few injuries.

The Lions have the option to enter this match unchanged, but the Dockers need to replace Ethan Hughes and their 2020 top draftee Heath Chapman, who both sustained shoulder injuries last week.

The young Dockers do not have the best record outside of WA, but they have improved slightly on the road this season, highlighted by their round five win over the Crows in Adelaide. We think Justin Longmuir’s men will put up a greater fight than online bookmakers are predicting, but it will still be hard to knock off the in-form Lions.

We expected Dayne Zorko to lead the way for the Lions while Neale is sidelined, but their young star Hugh McCluggage has clearly been their best midfielder. The former No.3 draft pick has passed the 30-disposal mark in his last three contests, and is priced at $2.10 with Sportsbet to hit it again this Sunday.

Matt Taberner is one of the most underrated key forwards in the AFL, but that is set to change as the Fremantle spearhead continues to pile on the goals this season. The Docker has slotted 20 goals already this year, including 11 goals in his last three contests.

Harris Andrews has been a very solid full-back for the Lions, exemplified by his 2019 and 2020 All Australian blazers. But he will have his hands full against Taberner this Sunday, as the marking target has kicked a goal in 30 of his last 32 matches.

Although the Lions beat the Power by 49-points last weekend, we think the Dockers will keep the margin to a minimum. Justin Longmuir’s men have beaten the Lions in four of their last six matches at the Gabba, while they only went down by 12 points in last year’s clash.

Matt Taberner to kick 3+ goals
The Dockers do not have many imposing targets inside 50 besides Taberner, allowing the tall forward to fly for his marks and lead the way in front of goal. Taberner has kicked multiple goals in every match this season, while he is coming off three consecutive games with three or more goals. Trust in the Fremantle forward to keep his momentum rolling this Sunday.

We expect a strong performance from Taberner in front of the goals will keep the Dockers within reaching distance for most of this match, but a dominant game from McCluggage in the middle should see the Lions get the victory at the Gabba.