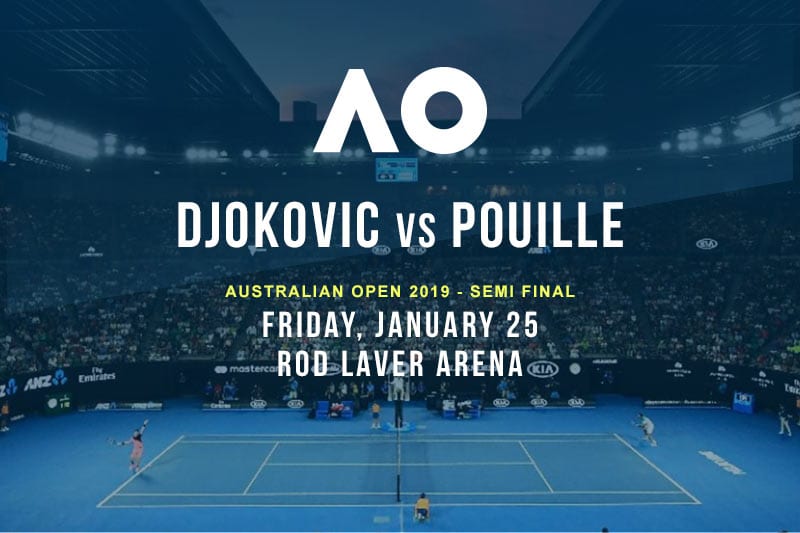 THIS time last year, we were left wondering if Novak Djokovic would ever have another chance to add to his collection of six Australian Open titles.

But the Serb has surged back to the top and is now chasing his third major win in a row after finishing 2018 with triumphs at Wimbledon and the US Open.

He has enjoyed a comfortable run as the first seed at Melbourne Park, made easier still by Kei Nishikori’s early forfeit in the quarters.

Until this year, Lucas Pouille had never won a single match in five attempts in the main draw of the Australian Open.

He got that monkey off his back with a straight-sets win over Mikhail Kukushkin and has not looked back.

The Frenchman has played four sets or more in every match since, but he had enough in the tank to outgun an in-form Milos Raonic last time out.

Despite that impressive run, this ranks among the most lopsided semi-final matchups in living memory.

Online bookmaker Sportsbet.com.au is paying a hefty $11 for Pouille to spring an upset and reach a major final for the first time.

Djokovic, at best odds of $1.06 with Ladbrokes, is offering the kind of money you would expect for a first-round fixture against an unknown qualifier.

Best bets for Djokovic vs. Pouille

It would be nothing short of incredible if Djokovic did not win this match.

The 31-year-old Belgrader has his eyes on the prize and should be fresh after contesting only 12 games before Nishikori called it quits.

Pouille has performed above and beyond to get this far, but he has not faced anyone close to Novak’s calibre in the previous rounds.

The 28th seed has also spent a lot more time on court, and that catches up with even the hardiest players at this stage of a grand slam.

These two have never met on the ATP Tour before, so it is difficult to gauge exactly what to expect in terms of set scores and games won.

It is, however, dead easy to trust in Djokovic’s superior class and back him in for a straightforward victory.