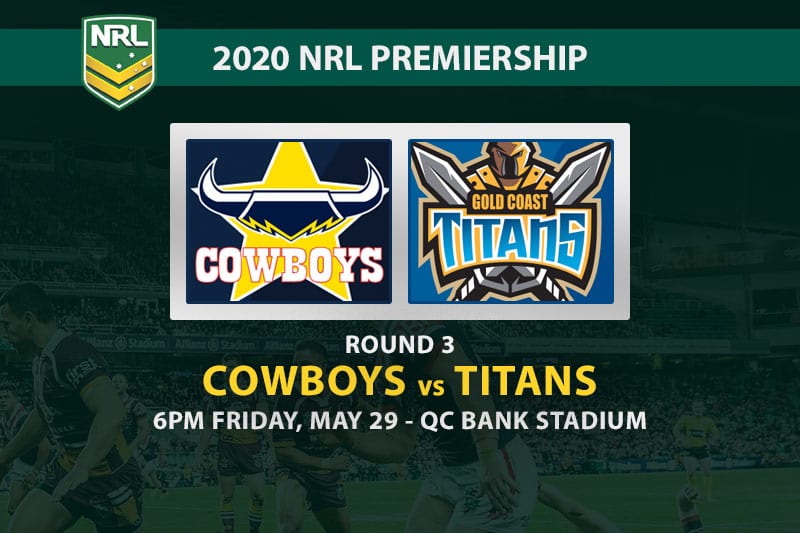 Even if it isn’t the hottest rivalry in the NRL, a local derby is always good fun.

The North Queensland Cowboys get the luxury of playing at their new home stadium in Townsville but will have to front up without their captain Michael Morgan, who is still recovering from shoulder surgery.

Morgan’s replacement, Jake Clifford, has shown glimpses in the past he can be a successful halfback at NRL level and brings a different skillset than his skipper.

The 22-year-old Cairns native offers a more natural fit to play alongside Scott Drinkwater in the halves. Clifford is suited to do more kicking and organising, while Drinkwater poses more of a running threat.

The suspension of the competition should have also done Valentine Holmes a favour as he gets his rugby league legs back under him after some indifferent moments in the opening rounds.

Jason Taumalolo traditionally starts a season with huge games on fresh legs and is coming off a 345m game back in round two. After a 10-week break, look for him to run riot against a Titans pack lacking depth.

No AJ Brimson for the Gold Coast Titans will see a reshuffle in their spine with Tyrone Roberts moving to fullback and Jamal Fogarty partnering Ash Taylor in the halves.

Moeaki Fotuaika will provide great thrust off the interchange for in Gold Coast’s front row, but their bench outside of him lacks a bit of oomph. Shannon Boyd won’t be available for the Cowboys clash, which will see Sam Lisone remain in the starting lineup.

Best bet for Cowboys vs Titans

The Titans were thrashed by Parramatta in round two and the Cowboys should see this as a great chance to move to a 2-1 record on their season. North Queensland’s last line looks as potent as ever, with Kyle Feldt the pick of the tryscoring threats.