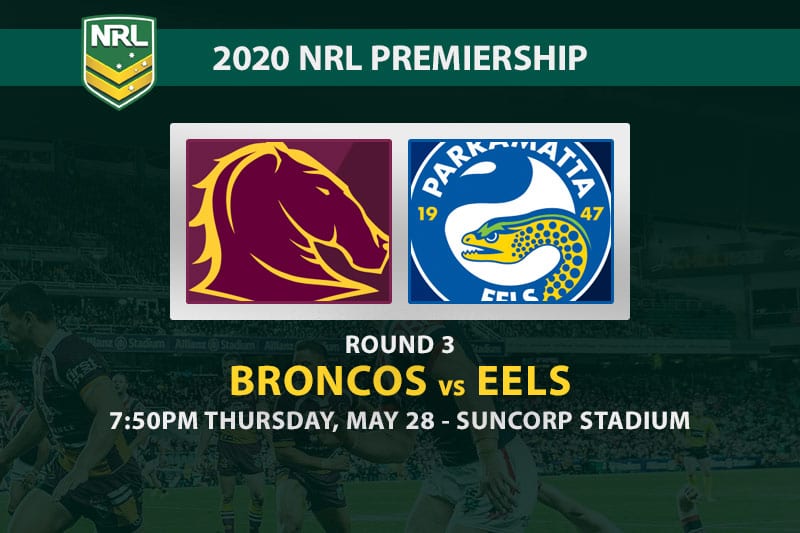 Finally we have some footy back in our lives!

Both teams have a few withdrawals. Parramatta’s Nathan Brown is out of action until round five, while Brisbane have David Fifita injured and Tevita Pangai Jr suspended.

The usual train of thought is to tip the home team in what’s expected to be a close battle, but the Eels certainly make a good case in one of their rare away games for the 2020 NRL season.

Parramatta will once again lean heavily on Maika Sivo and Blake Ferguson to do a lot of heavy lifting coming out of their own end, while the offloading of Shaun Lane and overall class of Ryan Matterson on the edges will also cause the Broncos some headaches. The inclusion of Reed Mahoney at hooker after a broken foot will leave the Eels reasonably settled following the suspension of the competition.

Should Brisbane get Matt Lodge at 100% health, he will be a huge inclusion to their forward pack. Missing the star duo of Fifita and Pangai will mean Brisbane have to keep the game more of a defensive contest. Parramatta have more strike power across the park and would be more favoured in a high-scoring game, but that’s not to discredit Kotoni Staggs and Corey Oates – both big performers for Brisbane in their victories before the break.

Best bet for Broncos vs Eels

With both teams sharing $1.90 in the head-to-head market, it looks to be a toss of the coin. That being the case, it is hard to go past the $2.66 on offer at Sportsbet for either the Broncos or Eels to win by six points or fewer. Lock it in.

Either team to win by six points or less