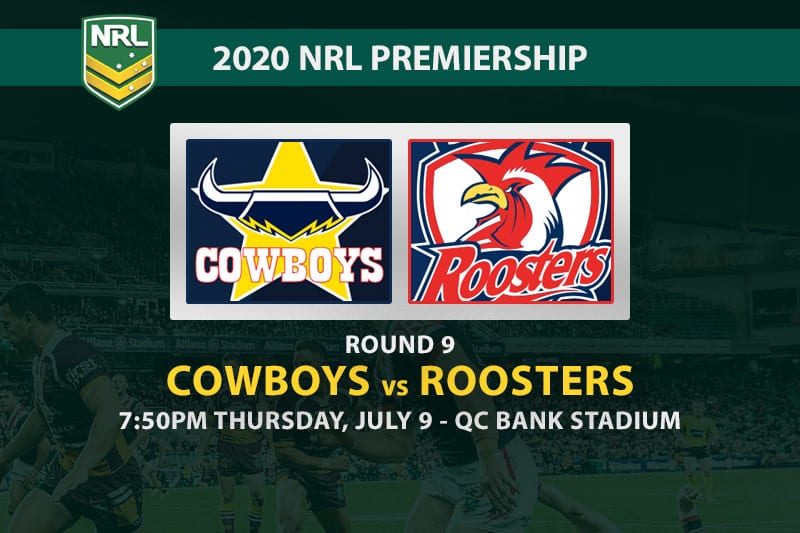 Just how does one try and predict what the North Queensland Cowboys will do week after week?

They blew a good Newcastle team off the park in their last game at home, but they followed that up with by conceding 40 points to Parramatta on the road.

The Sydney Roosters will have their second trip to Queensland in as many weeks, and the only risk they have in losing this game is if they fall flat after their taxing defeat to Melbourne.

Coach Trent Robinson will be livid with how they let a 10-point lead slip in the final moments of the contest to fall in golden point.

You can guarantee that won’t happen again this week, so the Roosters half-time/full-time double at $1.60 looks a fait accompli.

The line of 12.5 would normally be a big start, but the Cowboys are friendless at $5 in the head-to-head betting and still without Jordan McLean and Michael Morgan.

Valentine Holmes struggled on his return to action last week, leading NQC coach Paul Green to shift his star recruit to the wing and recall Hamiso Tabuai-Fidouw at fullback.

The over/under of 44.5 also feels too low for any Roosters game against a bottom-eight opponent, but even more so when they get to play on a billiard table in the north.

The Cowboys’ right-edge in defence has been abysmal all season, which is blood in the water for the lethal left of the Roosters.

As such, the likes of Josh Morris and Luke Keary will be backed heavily in the first tryscorer market, as will Ryan Hall at $10 replacing the injured Daniel Tupou.

While last Thursday proved to be one of the best regular-season games of all time, this one sadly won’t reach such heights. The $1.83 for a Roosters 13+ win is exactly how this should turn out.

Best bets for Cowboys vs Roosters