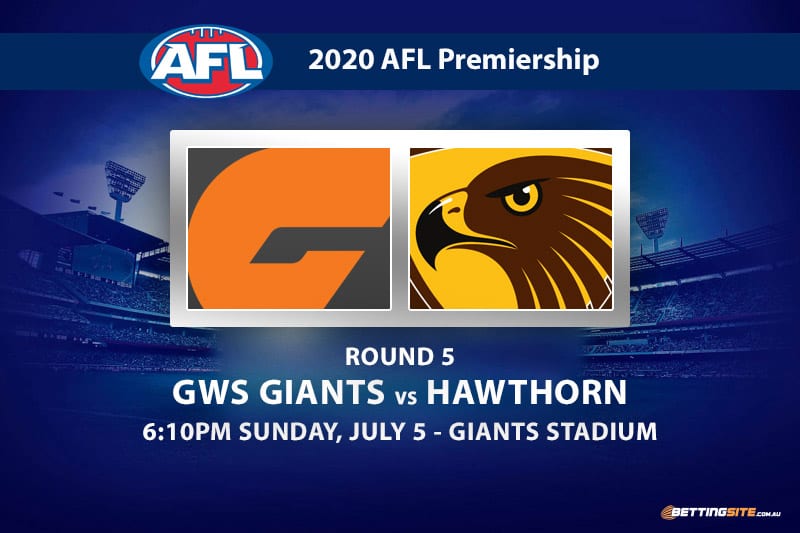 The final match of round five will see the Greater Western Sydney Giants take on the Hawthorn Hawks in a clash that could help shape the final eight down the track.

Many players have switched colours between these sides, with former GWS stars Tom Scully and Jonathon Patton hoping to deal their old teammates a loss this Sunday night.

Both teams escaped with narrow wins in round four; the Giants beat the Magpies in a similar fashion to their 2019 preliminary final, while the Hawks nearly blew a five-goal lead late against the Kangaroos.

A trio of classy players will all miss this match due to injuries, as Sam Taylor (back) and Zac Williams (hamstring) are sidelined for GWS and Luke Breust misses with a fractured jaw for the Hawks.

Toby Greene is in excellent form and will give Hawthorn plenty to worry about, but young Blake Hardwick will be ready for the task.

Alastair Clarkson coached the Hawks to a pair of big victories over the Giants last season, so the underdogs will take plenty of confidence into this clash.

The shortened game time has seen all the GWS midfielders drop in disposals, even with Tim Taranto sidelined after shoulder surgery and a variety of players missing each week. This matchup against the Hawks will benefit Jacob Hopper the most, as he is a smart, tough player that can keep up with the likes of Tom Mitchell, James Worpel and Jaeger O’Meara for strength and positioning.

With Matt de Boer certain to negate one of the major ball-winners for the Hawks, we think Chad Wingard will be a cheeky option that provides great value. He is one of the best medium forwards in the competition at the moment and has made an impact when pushing into midfield. Wingard notched up 20 disposals in round one against the Lions and will do it again this Sunday night.

With Jeremy Cameron and Toby Greene taking the two best defenders for the Hawks, Jeremy Finlayson is always a great third option to kick the goals. Finlayson made his move from the back line to the forward line in 2019 and kicked three goals against the Hawks in his only match against them. He loves the matchup and will be tough to stop with a clean run at the footy.

Jon Patton is still feeling out whether he can get his foot ready for this match, but Mitchell Lewis is locked in to start at full forward and will be a marking target inside 50. He kicked two goals in his last match against the Giants and will be hard to stop since Sam Taylor is out and Phil Davis missed last week with a hamstring.

Scoring has been easy for both the Giants and Hawks in 2020, mainly because they have an excellent mix of players and have been two of the top three sides for goal accuracy in 2020. The game will open up late in each quarter, where ultra-fit players such as Isaac Smith and Lachie Whitfield will create scoring opportunities.

The Giants managed to beat the confident Magpies last week and looked good doing it, which leads us to believe they will topple the Hawks on this occasion. The trio of Jeremy Cameron, Toby Greene and Stephen Coniglio will shine bright and get the Giants their third win of 2020.