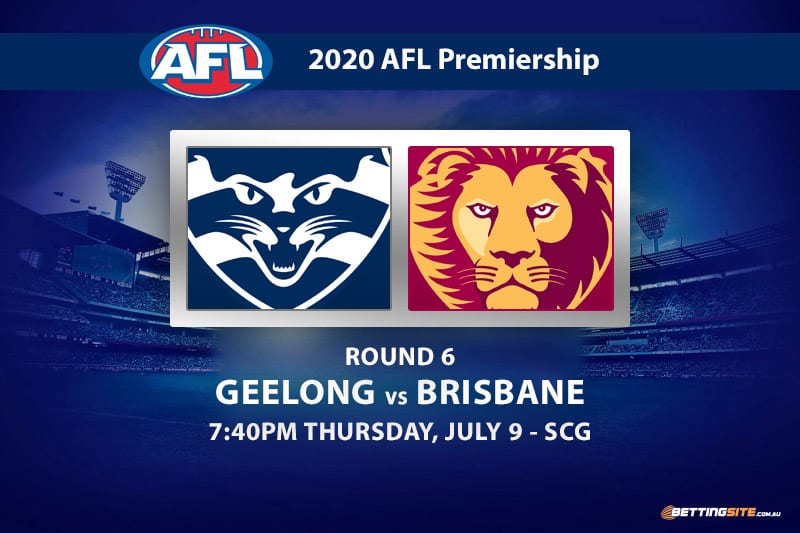 Round six of the 2020 AFL Premiership season will kick off with the Geelong Cats and Brisbane Lions at the Sydney Cricket Ground this Thursday.

Not much separates these teams at this point of the season, as the Lions and Cats sit second and third respectively on the AFL ladder.

Both teams won by 37 points in round five, with Geelong toppling the Gold Coast Suns while Brisbane outplayed the top-of-the-ladder Port Adelaide.

With Victorian teams abandoning their home state due to growing COVID-19 fears, the Cats must now venture north of the Murray after three games at GMHBA Stadium and one at the MCG.

The Lions are similarly put out by the trip south of the Tweed, however, as they are yet to leave the Gabba since the competition resumed.

All eyes will be on the midfield battle between Lachie Neale and Patrick Dangerfield, who are looming as two of the top candidates for this year’s Brownlow Medal.

Geelong has a history of dealing Brisbane some epic floggings, but these Lions are aiming at five straight wins and will take confidence from their one-point victory over the Cats last year.

As the Geelong midfield is very strong and moves the ball quickly, Sam Menegola has been played in many different positions around the ground. Sometimes the ex-Docker is deployed at half-back, but his best work has been on the wing this season. Having eclipsed 20 disposals three times already in 2020, including a 25-touch effort against the Demons, Menegola’s value this week is outstanding.

Getting better week after week, the 2016 draft’s no.3 pick is growing into a superb playmaking wingman for the Lions. Hugh McCluggage is averaging 20 disposals per game this season and knows how to find the footy against Geelong’s dominant midfield, as he had 27 possessions in Brisbane’s win over the Cats last year.

Gary Rohan knows the SCG better than any other player on either side, having spent nine seasons with the Sydney Swans before moving home to Geelong last year. We rate Rohan very highly and can see him using his speed, either on the lead or out the back, to snag a couple of goals against the Lions this week.

Tom Stewart would normally take the job on Eric Hipwood, but the Geelong stopper’s bung shoulder means Brisbane’s rangy forward could start the game with a mismatch. Harry Taylor might be too slow on a lead, while other defenders may lack the reach to compete with Hipwood in the air. If the Lions look for him early, he should have a chance to convert.

Most teams have found scoring difficult in 2020, but the Cats and Lions are ranked first and third respectively for points scored this season. The variety of players that can kick goals makes both these teams dangerous inside 50, leaning us more towards overs than unders on this occasion.

Given their recent form and strong spine, the Lions are our tip for this match. Harris Andrews and Daniel Rich control the back line very well, allowing the younger players to focus on their roles. Andrews kept the red-hot Charlie Dixon goalless last weekend, so Tom Hawkins and the Geelong forwards had better bring their A-game.