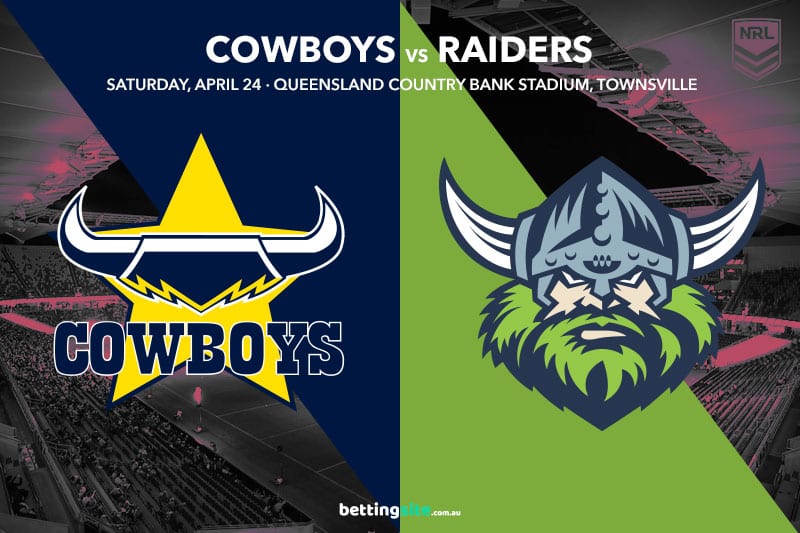 The North Queensland Cowboys have hit form with two wins on the trot, but they will face much stiffer opposition on Saturday night when the Canberra Raiders travel to Queensland Country Bank Stadium in round seven of the 2021 NRL Premiership.

Canberra have lost their last two games in a fashion that has become far from the norm with the Raiders in recent years, so can they rediscover who they are in the tropical north? The $1.31 head-to-head price suggests they should, but going from the cold of Canberra to the humidity of the northern Queensland is never a simple road trip.

It isn’t often the team with better form is at the $3.80 price, but it does look as though Todd Payten’s men have turned a corner, and a Cowboys team with a free mind could well and truly cause havoc for the Green Machine.

The $4.50 on offer for a Cowboys 1-12 win is a tantalising prospect, but how much trust do you have in a team that has only defeated the Tigers and Bulldogs? The line of +9.5 is probably the safest option; Canberra should realistically win, but they might grind one out rather than blow them off the park.

One youngster who has surprised has been the wily back-rower Benjamin Condon, who has scored in the last two wins for his club and is $7 to score a try this weekend. Who among us can say he can’t crash over for the third week in a row from close range?

Ricky Stuart was unhappy with his side’s big loss to Parramatta, and he has swung the selection axe with reckless abandon. Joseph Tapine and Iosia Soliola have been put back to the extended bench, while the unheralded Sebastian Kris comes onto the wing for Bailey Simonsson due to injury.

Caleb Aekins was terrific in his club debut and was perhaps the best in a well-beaten side, and he could be worth investing a few dollars in at the $15 price to score the first try. Tom Starling at dummy half loves a crash ball close to the line and found plenty of success with it in 2020, and it brings Ryan James at $7 into the frame as a great anytime tryscorer option. Many feel as though the Canberra Raiders should win easily, but the reality is they aren’t playing that well, so the $3 for the 1-12 margin of victory should be the way to go.

Canberra hooker Josh Hodgson will be missing through injury, but it gives a golden chance to Tom Starling to prove what many people already believe: that he should be the starter over the veteran Englishman. Cowboys hooker Reece Robson is quietly putting together a great season with his willingness to catch out lazy defenders around the ruck – a trait the diminutive Starling also possesses. Robson has a stockier frame, and it makes him a real scoring danger close to the line, but Starling’s courage and knack for shrugging off bigger bodies in the midfield make him a threat in a different manner. It isn’t a big-name hooking battle, but it is one hardcore fans will absolutely love.

Canberra Raiders to win by 1-12 points

The Raiders will win a game where they pour a ton of energy into their defence and score about 20 points. They’ve conceded 30 in their last two games while the Cowboys have scored that many, so you just know they’ll build a green wall. The 1-12 margin at $3 looks the best value.

We are on the Raiders by 1-12 with Kyle Feldt, Caleb Aekins and Sebastian Kris to all score a try. At $36.25, how can you not back this one?