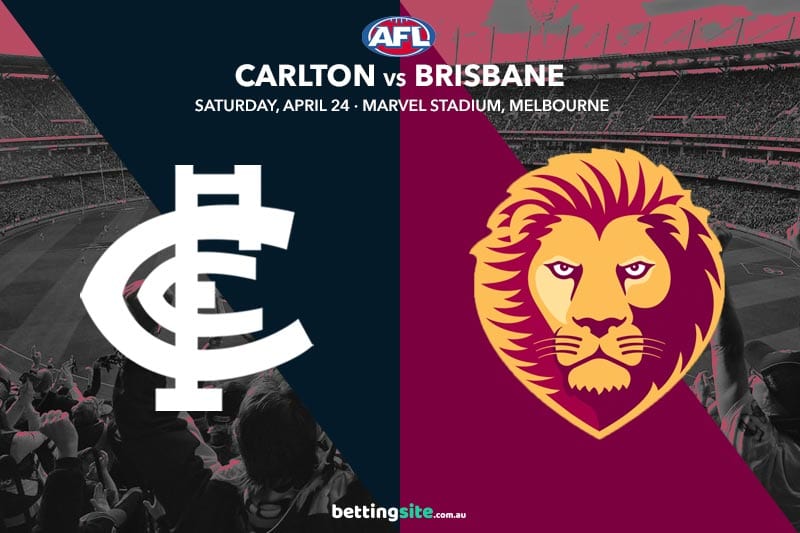 Carlton will host Brisbane under the roof of Marvel Stadium on Saturday afternoon in an AFL matchup that has plenty of consequences for the loser. Both teams sit at 2-3 and will not want to be 2-4 after six rounds of footy. The Blues are coming off a disappointing performance against Port Adelaide last weekend, whereas Brisbane put on a wet-weather footy masterclass against Essendon in their return to the Gabba.

Much of the spotlight in the lead up to Round 6 has been on Carlton and their underwhelming start to a season that promised plenty. Having come through their last-start defeat with a clean bill of health, the Blues will need to be at their very best as they take on one of this year’s contenders as $2.31 outsiders.

The Lions will be sweating on the fitness of young gun Jarrod Berry (adductor), who failed to finish their game against Essendon. But despite the topsy-turvy start to their 2021 season, Brisbane look perfectly placed as $1.66 favourites to even up their win-loss ledger to 3-3.

How will Blues vs Lions play out?

Carlton will need everything to go their way to be competitive against Brisbane on Saturday afternoon, and a few players will have to stand up and help the likes of Sam Walsh and Patrick Cripps. Levi Casboult needs to be one of those guys. The big forward has just four goals to his name from five games this year, but he showed signs of improvement against Port Adelaide when bagging himself two majors. Given the perfect conditions under the roof at Docklands, we are very interested in the $4.80 on offer at Neds for Levi to kick three or more goals this weekend.

Brisbane will be hoping Joe Daniher’s performance against his former club Essendon last week was not just a once-off. Against an undermanned Carlton backline, we expect Joe to make a big impact on the scoreboard. He has kicked a goal in every game this year, but we are backing him this week to get a bag of five goals for the first time since 2017. With key forwards dominating the early rounds of the 2021 AFL Premiership, the $11 at Sportsbet for Daniher to boot five is well worth a play.

A future superstar comes up against the reigning Brownlow Medalist in one of the best one-on-one matchups we will see this weekend. Sam Walsh is averaging a career-high of 30 disposals per match this year and is quickly becoming one of the best midfielders in the competition. Lachie Neale, on the other hand, has been one of the AFL’s most prolific ball-winners for several years now. Both players are paying $2 to get 30 or more disposals on Saturday, and we think they are must-haves for the AFL multi bets this week.

The Lions are seen to be one of the premiership fancies this year, and it is crazy to think that online bookmakers have them as a just over a goal better lineup than Carlton. The Blues have trouble keeping up with teams who have the ability to kick a high score, so they will want to make this a dour affair wherever possible. Expect the Lions to be too strong over four quarters as they cover the line with relative ease.

Carlton have covered this line in three of their first five games this season, including in Round 1 against Richmond. Brisbane are notorious for being slow starters in Melbourne these days, as seen in their matches against Geelong and Collingwood this year. If Carlton are supposed to be a team on the rise, expect them to be up for the fight in the first quarter at least.

The Lions should be heading back to Brisbane at 3-3, led by a resurgent Lachie Neale. We do, however, expect Carlton to put up a fight with strong performances from the ever-consistent Sam Walsh and big Levi Casboult.