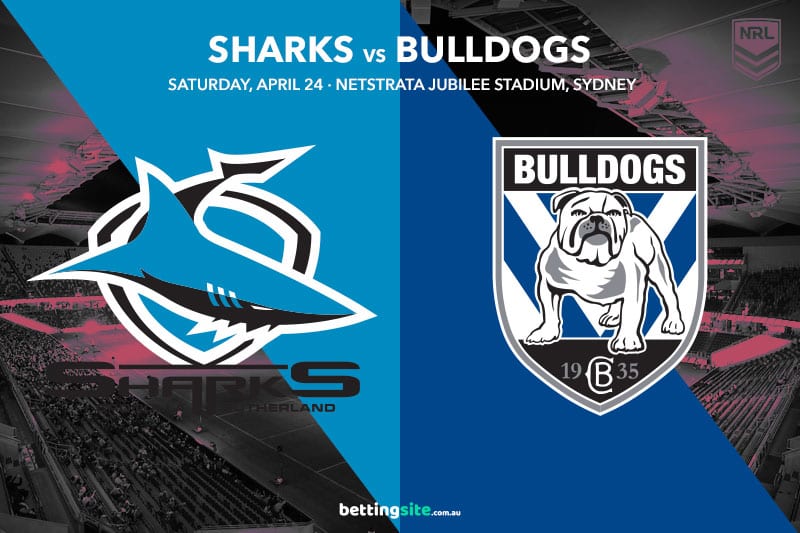 Six straight losses for the Canterbury-Bankstown Bulldogs is hardly the way they wanted to head into round seven of the 2021 NRL Premiership, but it’s the unfortunate reality they must face when they take on the Cronulla-Sutherland Sharks at Netstrata Jubilee Stadium on Saturday evening. The Sharks were left heartbroken by a Kalyn Ponga masterclass in Newcastle but will need to bounce back quickly so they don’t lose touch with the top eight. At $5.80, most punters and online bookmakers feel as though the Bulldogs have no chance to win the game, but some upsets have started to emerge in the last fortnight. If they can’t get the win, it will be their worst start to a season in the top flight since their inaugural campaign in 1935.

Connor Tracey is a natural playmaker but is doing a fantastic job on the wing for the Cronulla Sharks, so much so he is the favourite at $7.50 to be the game’s first tryscorer. William Kennedy was denied that honour last week by a piece of desperate defence, and at $9 he is the Sharks player we like most to crash over first. In the anytime tryscorer market, Matt Moylan at $3.60 looks to be a good choice. He was threatening more often than not against Newcastle and has a history of producing his best against bad teams. The 13+ margin at $1.62 is quite short, so the -16.5 line feels the better option to back.

The Bulldogs are at their lowest ebb, and it is genuinely hard to find much to be optimistic about them. Cronulla should win, but they have hardly been setting the world on fire and there might be a case to take the +16.5 line. Canterbury did show some fight to get back in the game last week despite being down to 12 men and Cronulla have faded in the second half in consecutive games, so there is a universe where some garbage-time points bring the deficit under 16. To take Luke Thompson at $51 to score the first try would be a desperate throw at the stumps, but his fast footwork close to the line against a less-than-stellar defence actually makes him a decent choice.

Shaun Johnson returns for Cronulla via the interchange bench, and it will be interesting to see how he is used by caretaker coach Josh Hannay. Is he purely there in case of injury, or is there a tactical decision to be made? The most likely option is he will be a straight swap for Chad Townsend, and that highlights the lack of playmaking the Canterbury Bulldogs have at their disposal.

Kyle Flanagan was the marquee purchase for the Doggies in the offseason but has failed to deliver behind a badly beaten forward pack. He has rarely challenged a defensive line in 2021, and he could do worse than to watch some highlights of Johnson before his injury in 2020. Striking a balance of when to run, when to pass and who to get the ball to is something the Canterbury halfback desperately needs.

Cronulla Sharks to win by 13+ points

Cronulla should win relatively comfortably, but a few late tries to the Bulldogs will make it look a lot closer than the game actually will be. The 13+ margin feels the safe way to go, as the Sharks can’t be trusted just yet to go on with the job.

Sharks 13+ with Matt Moylan and Briton Nikora to both score a try gives you a healthy $11.50 at Sportsbet.