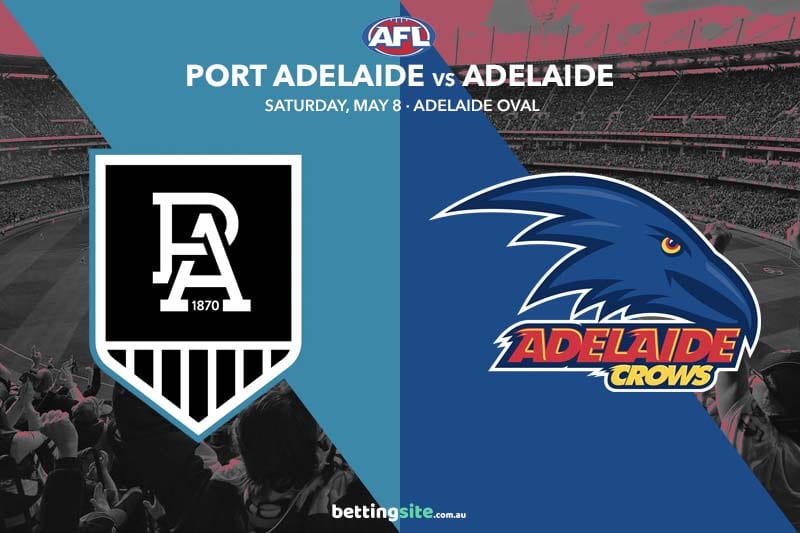 Showdown 49 takes centre stage on Saturday night when Port Adelaide and Adelaide clash at the Adelaide Oval to renew one of the competition’s biggest rivalries.

Port Adelaide will be seething after their insipid performance against Brisbane at the Gabba last week and it was their second such performance on the road to begin 2020. A win on Saturday night against the Crows is a must.

Adelaide started the year one fire, winning three of the first four matches, but are currently on a three game losing streak. The Crows were awful in their loss to an injury-ravaged Giants and Matthew Nicks will be looking for a strong response from his team against their cross-town rivals.

Online bookmakers have Port Adelaide as red-hot $1.20 favourites to beat the Crows, while if you think Adelaide can cause the upset, there is value to be found with $5.25 available for the 13th-placed Crows.

In their past five games Port Adelaide have looked like genuine premiership contenders, and a team that could miss the top four all at once. They won three on the bounce between ROund’s four and six, but their last month was bookended with two horrific performances on the road against West Coast and then against Brisbane last weekend. Key forward Charlie Dixon is horribly out of form, and they will be looking for the former Sun to have a big impact against the Crows. The Power are set to welcome back Travis Boak and Ryan Burton from injury for the Showdown.

The Crows put in arguably their worst performance of the season against the Giants, and will be needing to be at their very best to be competitive against Port. The Crows are set to welcome back captain Rory Sloane from injury in a much needed boost to an underperforming midfield. If Adelaide are to have any chance they will need a big performance from Taylor Walker up forward, after he was well nullified by the Giants’ Sam Taylor last weekend.

Prior to the start of 2021 Charlie Dixon would absolutely manhandle Jordon Butts ever time. However, Port Adelaide’s full forward is having one of the toughest starts to a season of his 11 year career. From his first seven games he only has 1 goal to his name, and is coming up against Jordon Butts who looks right at home replacing Daniel Talia as Adelaide’s number one key defender. Dixon has been kept goalless three times so far this year, and if he is not at his best on Saturday night it could be an uphill battle for the big brute. On a positive note the odds on Dixon kicking a bag have skyrocketed with the top betting apps after his poor start to the season.

If Port Adelaide are going to be genuine AFL premiership contenders this year, they simply have to be walking away from Showdown 49 with the four points. They were embarrassed by Bribsane last weekend and will be looking to build on the form they put forward in the first six weeks of the season. With the return of Travis Boak and Ryan Burton they should be bouncing back with a win against Adelaide, but the Crows will certainly not go down without a fight.

Hamish Hartlett is a true barometer of how Port Adelaide is going, last week he had just eight touches from 76% time on ground. He gets back to Adelaide Oval where he has been playing his best footy so far this year, averaging a tick under 22 disposals per match at his home ground. The Power lacked plenty of continuity last weekend with the ball movement out of their backline, and will be looking for Hartlett to lead the way on Saturday night.

The first Showdown of the year is always a must watch spectacle, no matter where the two teams are on the ladder it tends to throw up a couple of surprises. However, if Port are to be the real deal this year they need to be walking away with the four points. Led by veteran duo Hamish Hartlett and Robbie Gray the Power should have too many answers for the questions the Crows pose.