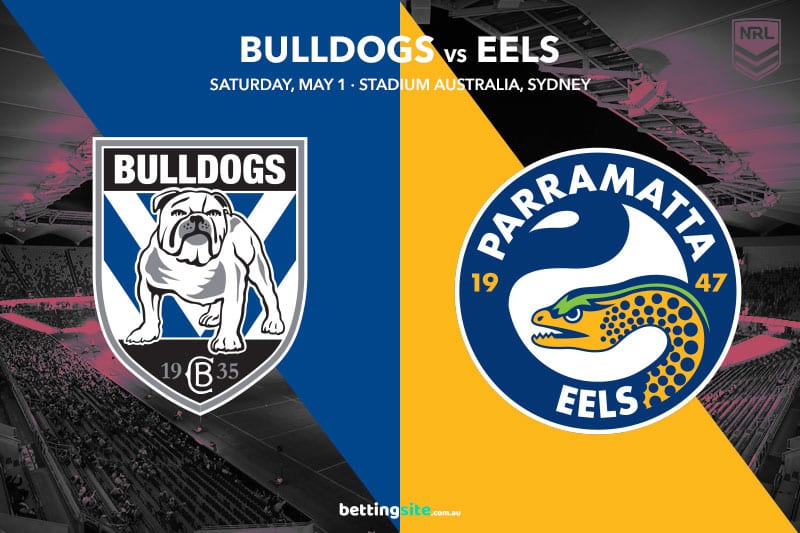 The Canterbury-Bankstown Bulldogs enjoyed an enormous high in round seven by recording their first win of the 2021 NRL season, but they’ll be brought back to earth when they take on their bitter rivals Parramatta at Stadium Australia on Saturday afternoon. Bulldogs coach Trent Barrett was moved to tears from the win, so how does he get his players to focus on causing another huge upset?

Parramatta are the hot favourite on the back of their dominant victory against the Broncos in the heat of the Northern Territory, but does it make them vulnerable despite this game looking like a no-brainer? The four-hour flight and the weather conditions could leave them a little flat this week, so perhaps the window opens for the Bulldogs.

Do the shackles come off the Doggies now they’ve finally taken some of the pressure off by getting a win? It will no doubt give them some confidence to take a few risks, and there is great value on offer if you’re able to pick some try scorers. Nick Cotric is Canterbury’s shortest player in the anytime tryscorer betting at $3, but Will Hopoate as the skipper for this game at $5 is one that can give punters huge value in their multis. The Bulldogs’ last three games against the Eels have turned into tight, scrappy affairs, and that makes the +19.5 line extremely attractive.

Four Parramatta players are in single figures to be the first tryscorer, which shows just how lopsided everyone thinks this game will be. Maika Sivo is just $6 for the opener with some NRL bookmakers, but if you put him in a two-leg multi with Clint Gutherson to score at any time, you’ll get north of $10. The -19.5 line feels long for a derby game, although Parramatta have won their last two outings by more than 20 points.

Luke Thompson has made a big difference to the Bulldogs forward pack since coming back into the team in round five following a suspension. His 164-metre performance laid the groundwork, and his other two games this year he has run for 140 and 148 metres respectively, but will Thompson have the same impact against Junior Paulo and an impressive Parramatta Eels forward pack? It’s a team game and he will need some help from the likes of Dylan Napa, but Thompson holds the key for Canterbury. He has great footwork and can generate quick ruck speed, which is probably the only way the Bulldogs can realistically expect to make inroads on the Eels defence.

Parramatta will get the win, but they won’t run up a big score. The last three games between these two teams have all been closely fought until the death, and that means the Bulldogs at the +19.5 line is the way to go.

Bulldogs +19.5 with Maika Sivo to score the first try at $12.50 is where the cash should be flowing.