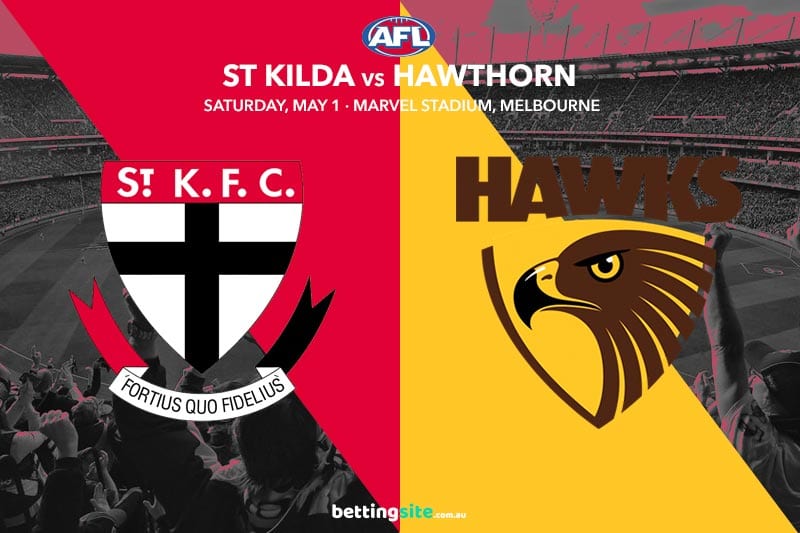 St Kilda will look to turn things around when they host Hawthorn under the roof at Marvel Stadium in the AFL’s twilight slot on Saturday afternoon.

Brett Ratten and the Saints are coming under extreme scrutiny following another disastrous showing last weekend, this time against Port Adelaide at the Adelaide Oval. Hawthorn, on the other hand, have been giving plenty of time to their youngsters and were rewarded with the four points in a back-and-forth match against Adelaide.

Hawthorn may be the outsiders at $2.40 with AFL bookmakers, but they have been much more consistent over the first six weeks than St Kilda at $1.63 favourite odds.

St Kilda and Hawthorn both come into this match with two wins and four losses to their name. If the Saints are to get the job done on Saturday, they will need a big effort from Max King. Their key forward has kicked just the one goal in the last two weeks after booting nine in his first five games of the year. He kicked five goals against West Coast three weeks ago and, much like his teammates, has gone missing since then. Hawthorn’s defence is not exactly known for keeping key forwards quiet this year, so the $4.20 price for King to boot four goals or more is hard to ignore.

Jacob Koschitzke snagged five goals in Hawthorn’s shootout win against Adelaide last week, but it might pay to look at some different scoring options for the Hawks this week. Port Adelaide highlighted just how much the Saints are struggling to contain small forwards, with Orazio Fantasia and Steven Motlop combining for six goals between them. Luke Bruest booted three goals last week and should fancy his chances of adding a few more to his tally in Round 7. Sportsbet has Bruest priced at $3.50 to kick three goals or more, which is a must for the same-game multis.

Jack Steele and Jaeger O’Meara are enjoying career-best seasons, and both will be instrumental in how their teams fare on Saturday. Jaeger was close to best on ground against Adelaide last week when racking up 31 touches and a goal, whilst Steele was the only shining light for the Saints in their loss to Port. Between the two of these bulls, it will come down to who gets the ball to their outside midfielders most effectively.

Hawthorn in the head-to-head market looks to be one of the better value plays over the weekend. St Kilda have won just five quarters of footy for the season to date, and if the Hawks bring the same intensity as they did in Round 6, then they will be too good. The Saints will be without their high-profile recruit Brad Hill (Achilles), while Hawthorn are a chance to regain veteran forward Jack Gunston.

Coin-flip odds are available for Chad Wingard to kick a goal against the Saints. Having not split the sticks in the last two weeks, he will be chomping at the bit to provide a handy contribution on Saturday afternoon. He has been playing limited minutes since his return from injury in Round 3, but we expect him to spend plenty of time in the forward line this week.

We think the market has got this game around the wrong way. Led by small forwards Luke Bruest and Chad Wingard, the Hawks will be too quick around Marvel Stadium for the under-fire Saints. Even so, we are expecting a big one from Max King.