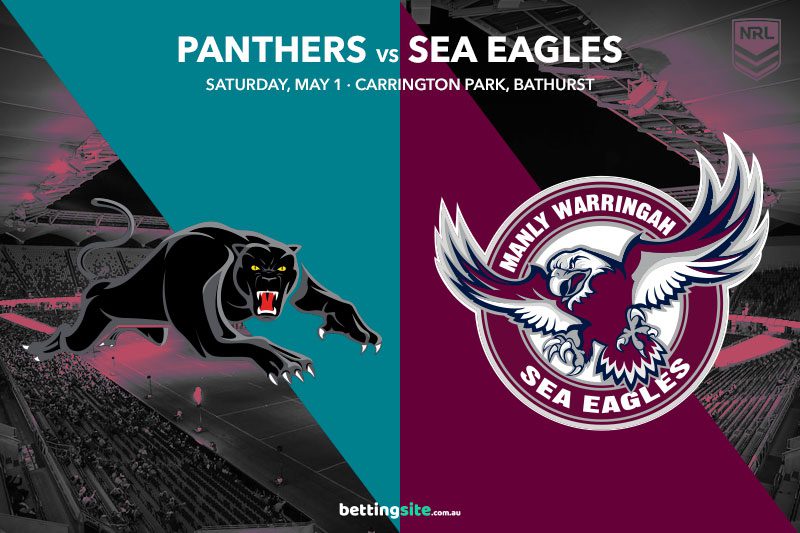 The high-flying Penrith Panthers will take their home game against the Manly Sea Eagles in round eight of the 2021 NRL season to Bathurst in the Central Tablelands of New South Wales.

The last NRL game the Sea Eagles played in the country saw them demolish the Titans 36-0, but they’ll be expecting a far tougher day at the office against the competition’s only undefeated team.

The two sides met at Lottoland just a month ago when Manly were embarrassed at home in a 40-point loss, but that result has sparked a stunning form reversal for the Sea Eagles.

The $1.19 price is the longest the Panthers have been at for three weeks in a head-to-head market, but can a Tom Trbojevic magic show give Manly one of the most unlikely wins in season 2021?

The left centre for the Panthers has scored a try in 18 of their last 19 games, so depending on how Matt Burton and Stephen Crichton line up, they make for the best tryscoring options. Both scored last week, and whoever is on the left should be backed as the first tryscorer. Burton is a halfback by trade, but he has been a revelation at centre this season.

The $1.72 for a Panthers 13+ margin feels a bit short considering how Manly have rocketed back into form, but that price also shows the respect Penrith have earned from the online bookmakers. The league leaders have won all five of their games against bottom-eight sides by more than 13, so it’s hard to be talked into the 1-12 range.

An embarrassing loss a month ago against Penrith seems to have been the turning point for the Sea Eagles, and there is some realistic value to be had for them in this contest. Manly have averaged 38 points a game with Tom Trbojevic in the team, so to get him at $2.70 to score at any time is almost unheard of. Morgan Harper at $5 at right centre is also one who needs to be looked at to cross the stripe.

Penrith haven’t given up more than 12 points in any game this season, but one feels the Manly Sea Eagles might have the momentum to breach that mark. It makes the +14.5 point line an attractive prospect, although a lot will have to go right for the underdogs to make it a close game.

It’s an unusual battle, but Daly Cherry-Evans holds the key to slowing down Brian To’o on the left wing for Penrith. Brisbane bombarded To’o with high kicks and barely let him get any momentum on kick returns, but he still managed to rack up more than 200 metres on the ground. Cherry-Evans has to be looking at early kicks in the first half, and because of his enormous boot, he can turn Penrith around and sap some energy out of the forwards to limit their impact later in sets. When kicking later in the sets, the key will be getting the height and chase inch-perfect on the kick so To’o is being tackled as soon as he catches it.

Penrith will make it eight wins in a row as they get up by exactly 14 points, which is paying a delicious $15 at Sportsbet. They’ll have their usual attacking brilliance, but eventually they have to concede more than 12 and Tom Trbojevic will be the reason why.

Penrith by exactly 14 points with Tom Trbojevic and Matt Burton to score any time gets you a very tasty $95 payout. Throw $2 on it and see what happens.