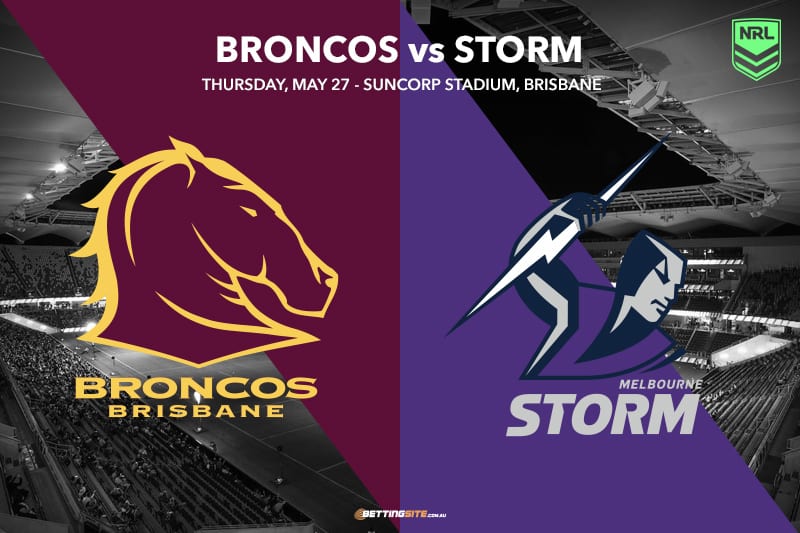 The Brisbane Broncos are flying high following a famous win over the Roosters in Round 11, but they’ll be dealt a reality check when the Melbourne Storm travel to Suncorp Stadium on Thursday evening. The Storm have won 21 of their past 25 games against Brisbane, and you have to go back to 2009 for the last time the Broncos were able to defeat Melbourne at home. The Storm are attempting to win their ninth game in a row by 13 or more points, so the $1.11 head-to-head quote is no surprise.

To produce two giant-killing performances in consecutive weeks is a bridge too far for the Broncos. Their performance last week was amazing, but everything about this game suggests Melbourne will have their way with them. That’s not to say they won’t have their moments; they can certainly score at least 18 points, but to beat Melbourne you need to have the ability to get 30 on the board.

Tyson Gamble’s absence will be felt, but it gives Anthony Milford another chance to save his career. How will he combine with Albert Kelly in the halves for Brisbane? David Mead was the hat-trick hero last week, but with Xavier Coates coming up against his future team, is he the man to cross for multiple tries? The +18.5 line does feel short when you look at the previous results between these two clubs.

If you are putting some money on the Melbourne Storm, do some shopping around and look for the best possible price at the 13+ margin. The last five clashes at Suncorp Stadium have resulted in that margin, and again it just feels inevitable. Even if Melbourne are unexpectedly given a run for their money, their class will shine through.

Josh Addo-Carr somehow didn’t get on the score sheet last week, but he bagged a hat-trick in his last game at Suncorp Stadium, so he is the first man you will want to get on in the tryscorer markets. With the Broncos set to recall Milford because of Gamble’s injury, the right edge for Melbourne should all be backed to score at any time, but in particular Felise Kaufusi if you are after some value.

Tevita Pangai Jr showed last week why he is given a long rope by the Broncos. His talent is undeniable, and when he shows up in a mood to get under the skin of the opposition, he quite often does. It worked when he took on Victor Radley last week, and now he is going to have to tackle the man mountain that is Nelson Asofa-Solomona. The only way Brisbane have any chance of winning is for Pangai Jr to run wild again, but it’s hard not to back that Melbourne forward pack to do the job.

Melbourne will get the 13+ win for the ninth week in a row. It might not pay a lot, but it beats the hell out of not backing it. Brisbane’s middle will hold their own, but the Melbourne backline will cut them to pieces out wide.

Storm 13+ with Josh Addo-Carr, Xavier Coates and Nicho Hynes to all score a try feels like a good way to get the weekend started.