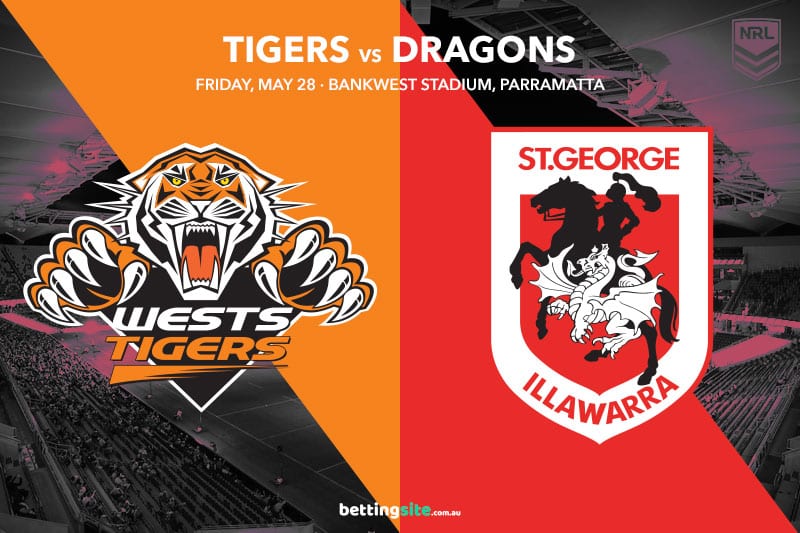 The Wests Tigers secured a win over the St George Illawarra Dragons a month ago when they were in dire need of two points, and they find themselves in the same situation for Friday night’s game at Bankwest Stadium. That result, along with the player-availability crisis at the Dragons, has seen Wests come into $1.50 favouritism despite a last-start loss, but that shouldn’t deter punters. Every time the Tigers have been favoured to win a game in 2021, they’ve come up short, so how do they buck the trend? Tariq Sims will return from suspension for the Red V, but they could be without Cody Ramsey, who failed a HIA in the loss to the Sharks.

Scoring points is never really an issue for the Tigers, but captain James Tamou told media on Monday they need to act fast if they want to get into the race for finals. They have conceded 30 or more points in seven of their 11 games this season, but the one team they kept to single figures was the Dragons, so it may be a case of this game falling into the ‘unders’ category for the total points line.

Joseph Leulia produced his best game for Wests in their round-eight win, so he could be one to look at in the tryscoring stakes. The form of Adam Doueihi is impossible to ignore, and punters need to get on him to cross the line also given the lack of experience currently on the Dragons left edge.

Whoever is fit at Kogarah should get a jersey on and tell Anthony Griffin they’re right to go. If Cody Ramsey is unable to recover from a head knock, scoring points is going to be made even harder for the Red V. Ramsey was St George Illawarra‘s only tryscorer when these teams met in round eight, and his potential absence is going to see more pressure fall onto the shoulders of Ben Hunt and Corey Norman.

Max Feagai scored a double last week and also suffered a concussion, so Gerard Beale could make his NRL return after coming out of retirement to help his former club. Jordan Pereira shapes as a great tryscoring option coming up against David Nofoaluma, who is a spot defender in the Tigers line.

Luciano Leilua made his name at the Dragons, and he is regularly among the best for the Tigers. He will line up against another big unit in Josh Kerr, who is enjoying a great season as he transitions from the middle to a damaging back-rower. They are two of the bigger edge forwards in the game, but they have contrasting styles. Kerr plays exactly how someone at 6’4″ and 115kg should play, while Leilua has a style which is closer to teammate Daine Laurie, who weighs 29kg less. Styles make fights, and this individual battle will be one to watch.

The Dragons are low on troops, but the $2.60 price is too good to ignore. They will win the game based purely on the Tigers’ inability to win with any expectation on them. Anthony Griffin has shown as an NRL coach that while his sides may lack flair and creativity, they are always competitive no matter who is in the matchday 17. The Tigers lack that competitive edge as a team.

Dragons +5.5 with Luciano Leilua and Jordan Pereira to score a try at any time gets you a nice $14 return.