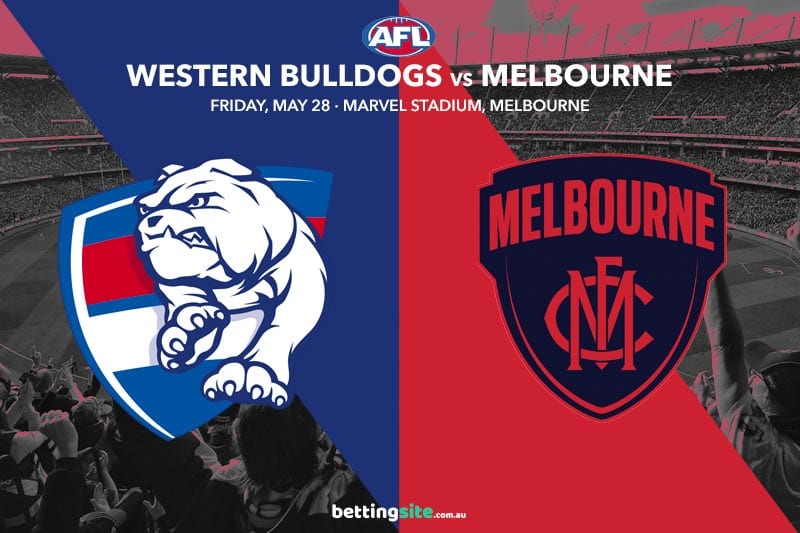 The Western Bulldogs will clash with Melbourne at Marvel Stadium this Friday night in one of the biggest fixtures of the 2021 AFL season to date.

Both teams hold a 9-1 record heading into round 11, with the Doggies sitting top of the ladder due to their superior percentage.

The Dees will be close to full-strength this Friday with Jack Viney likely to return from his toe injury, while the Bulldogs will be without Adam Treloar after the former Magpie sustained an ankle injury against the Saints.

With glorious matchups across the entire ground, this tussle for top spot is a must-watch.

Despite both clubs housing some of the best midfielders and forwards in the competition, it has been the defenders who are helping the Bulldogs and Demons the most this season. The Doggies have conceded the fewest points so far in 2021, with the Dees not far behind them in second place.

The midfield battle is going to decide this match, as whoever gets on top in the guts will control the play. The Bulldogs love to handball in traffic, but they will need to be extremely sharp against the Demons, who are the best tacklers in the league.

These two gun midfielders currently sit first and second in the 2021 Brownlow Medal betting market. Marcus Bontempelli is coming off a career-high four goals against the Saints last week, while Christian Petracca is posting career-best disposal numbers this season. Both players love to get forward and kick a goal, while their ability to burst out of congestion sets them apart from the rest. This could be the best midfield matchup we see this season.

Western Bulldogs to win by 1-39

Tim English has been sidelined since round six with a nasty concussion, but this should finally be the week he returns to help tackle Max Gawn. The Bulldogs should be fine even without Adam Treloar, as Tom Liberatore is having an exceptional season and Jack Macrae is another Brownlow Medal contender. A slim win to the Bulldogs is the most likely outcome, so we are taking the 1-39 margin.

Josh Bruce and Aaron Naughton will keep Jake Lever and Steven May occupied, allowing the likes of Marcus Bontempelli to stamp his authority inside 50 for the Doggies. The Bont has kicked nine goals from his eight encounters with Melbourne, while he has never been more accurate in front of the stick than he has been this year. The Western Bulldogs captain has kicked seven goals in his last three outings and should hit the scoreboard more than once this Friday.

This match will have a finals-like intensity from the very first bounce. We expect the Bulldogs to win this clash and stay on top of the ladder, but Christian Petracca will give them plenty of trouble in the middle. Marcus Bontempelli will kick a couple of goals and help the Bulldogs secure their 10th win of the 2021 AFL Premiership season.