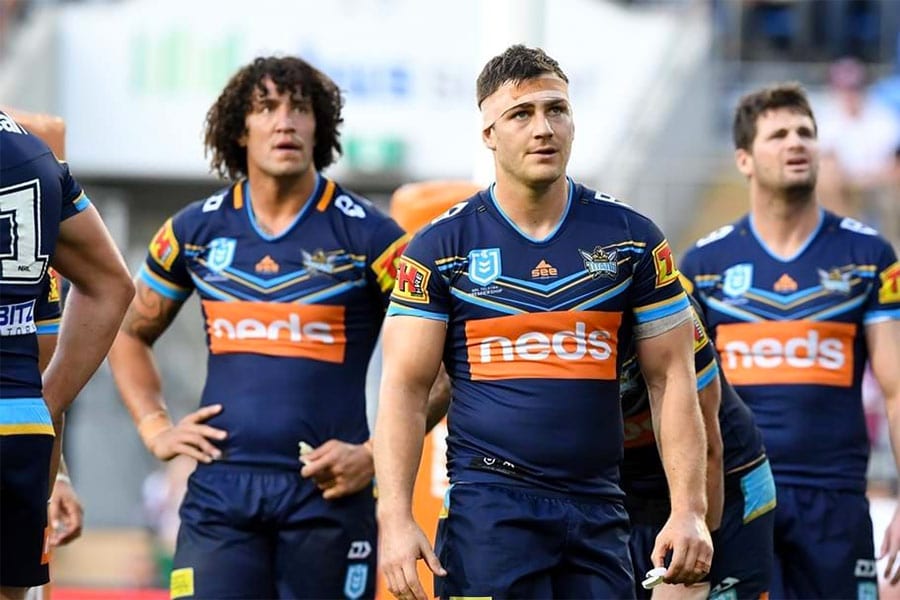 The revamped fixture for the 2020 NRL Premiership season is out, which means we can start speculating in earnest about each team’s prospects.

We have already taken a look at the likely flag contenders, so now it is time to run rule over the clubs we expect to fill out the bottom half of the ladder.

It’s hard to think a team has been up against it more than the New Zealand Warriors will be for 2020.

Add to this the fact the Warriors have sacrificed living with their families to help get the game back on its feet. Their record in Australia isn’t been great, which is a big problem when they face the prospect of playing no games at home for the remainder of the season.

Every neutral fan should be cheering hard for the Warriors each week. The competition is a lot poorer without them, but their 2020 season has all the ingredients for a disaster.

Hot Tip: They only get one game against the Titans and it may be the only game they have anything close to favouritism. Should win the wooden spoon.

New Zealand Warriors for most losses in 2020

It’s going to be another long season for the Gold Coast Titans. Rookie coach Justin Holbrook has a hell of a job on his hands just to get his team competitive let alone win games on a regular basis.

Star forward Ryan James is missing for a second straight year after tearing his ACL in the offseason, Bryce Cartwright is getting far too much money for what he provides and Shannon Boyd also needs to show a lot more after a disappointing 2019.

Just to add salt to the wounds, Gold Coast’s best player, Jai Arrow, already has a foot out the door after signing for the South Sydney Rabbitohs.

To put it kindly, the Titans are just making up the numbers again and it’s all about developing for 2021. They have highly rated young forward Tino Fa’asuamaleaui coming in and Holbrook gets a great chance to see what other young players he likes to begin the seemingly impossible process of building a consistent winner on the Gold Coast.

Expect a big season for Moeaki Fotuaika, who was fantastic as a rookie in a badly beaten team and one of the few who could be proud of their 2019 efforts.

Hot Tip: Avoid. The Titans will lose a lot of games, but there will be one random week where Phil Sami goes insane, scores a hat-trick and they win by 30.

They try hard every week, but they still don’t quite have enough and coach Dean Pay’s job is on the line.

For a team as decorated as the Canterbury Bulldogs, missing finals for a fourth straight season could potentially come with huge consequences.

In Dallin Watene-Zelezniak, Nick Meaney and Will Hopoate they have reliable week-to-week performers in the backline, but where they struggle is in the key positions of hooker, halfback and five-eighth.

The big boost for the Dogs is the return of Kieran Foran, who played well enough in 2019 to be recalled into the New Zealand team. If they get the best of ‘Foz’, he will swing a game or two in their favour.

The Canterbury forward pack begins to look light when you throw in Joe Stimson’s season-ending injury with the sacking of Corey Harawira-Naera, who many would argue was their best forward.

The Bulldogs will push teams hard most weeks, but they will have more frustrating losses than close wins in 2020.

Hot Tip: If you’re building a multi take the unders in all their games.

The St George Illawarra Dragons face the very real possibility of another coaching tenure gone up in flames if they don’t resume the campaign breathing fire.

Clashes against the Warriors, Bulldogs, Sharks and Titans present an opportunity for the Red V to get some wins on the board before they face stiffer competition.

If they have only one win from their first six games, the long-rumoured coaching change might become a reality.

James Graham appears to be on his last legs in the NRL, so the Dragons will need Blake Lawrie, Trent Merrin, Josh Kerr and co to take on greater responsibility around rep forwards Tyson Frizell and Paul Vaughan.

Who do they play at fullback? SGI spent the summer saying it was going to be Zac Lomax, who lasted just one game there before swapping out for Matt Dufty.

The ‘pick and stick’ philosophy may serve the Dragons well, but they are up against a hostile and success-starved fanbase as well as 15 other clubs.

St George Illawarra had a horror 2019 and appear to be heading the same way in 2020. Frizell has a foot out the door and a coaching change could happen quickly if results don’t come.

One win and a terrible loss is how they started their 2020 campaign, but upcoming games against the Sharks and Titans present two chances the Wests Tigers would feel good about.

Star halfback Luke Brooks will be back and they’ll be much more potent as a result. They may have scored 24 points against Newcastle, but 12 of them came directly from catastrophic mistakes by the Knights.

The extra training block should have served Joey Leilua well after a troublesome 2019 with a neck injury and a sluggish start to 2020. If he gets to his best, the Tigers become dangerous.

Like any Michael Maguire-coached team, Wests will lean heavily on controlling the ruck in defence. If they are forced to play at an even faster pace, they could be dealing with a few headaches.

For the most part, the Tigers punch above their weight with several bad contracts on their books. A classy halfback and a ‘never say die’ attitude have made them overachievers in the previous two seasons.

If hooker Harry Grant is as good as advertised, it may be enough to get them into the eight for the first time since 2011.

Hot Tip: It’s fun to joke about the Tigers being ninth, but they are missing the top eight again.

Many believed the Cronulla Sharks would struggle to reach finals football in 2020. While they started their season 0-2, there should still be plenty of optimism.

Losing to the Rabbitohs and Storm by a combined six points wouldn’t have bothered coach John Morris when you consider the Sharkies were missing Matt Moylan, Bronson Xerri and Josh Dugan.

The departure of Josh Morris to the Roosters has opened up the backline logjam and should keep everyone a little happier than they were in 2019 now they have a full compliment to pick from.

Xerri and Dugan’s return places pressure on Jesse Ramien, who came back to the club on a sizeable contract following a disastrous year with Newcastle.

Huge questions arise when talking about the Sharks’ forward pack, which lacks the punch of previous incarnations.

Is Andrew Fifita’s ongoing knee injury reducing him to just a few good games a year? Will Aaron Woods’ questionable ruck defence become too big of a liability for him to play big minutes if the gameplay speeds up? Can Jack Williams and Braden Hamlin-Uele produce more of their 2019 form after starting the season a little slow?

If they get positive answers to most of these questions and good production from Shaun Johnson on the back of it, Cronulla will push hard for a spot in the lower half of the top eight.

Hot Tip: Like Canterbury, the Sharks will be in a lot of games until the end. The shorter the margin, the better if you can pick your own line.

The North Queensland Cowboys have some interesting pieces, but no Michael Morgan to restart their season makes winning games a little more difficult.

Jason Taumalolo’s gargantuan performances keep them in a lot of contests, but their issue since winning the premiership in 2015 has been creativity and scoring points.

With no Morgan, expect Jake Clifford to once again get his chance with Scott Drinkwater outside him. Is this a better combination for the team? Morgan’s talent is undeniable, but his strengths are similar to those of Drinkwater. Clifford may be able to provide a point of difference with Valentine Holmes at fullback adding speed they’ve lacked in recent seasons.

A win against the lowly rated Bulldogs doesn’t have anyone convinced. However, with the Titans, Sharks, Warriors and Tigers as their next four games, the Cowboys could build a platform for a successful season.

Along with the Storm, Broncos and Eels, North Queensland get the advantage of playing at their regular home ground and will need to win consistently on their own patch if they’re to feature in finals football.

Hot Tip: Kyle Feldt or Valentine Holmes to be first tryscorer in any of Cowboys game.

Whether you rate Nathan Cleary highly or not, the Penrith Panthers may struggle without him as he serves a two-game suspension when the competition resumes.

After a stunning first-round win over the Roosters, the Panthers did just enough against the Dragons in the second round to bank four points before the league went on hiatus.

Signing Api Koroisau from Manly paid huge dividends in the opening games, providing a creative spark at the ruck and allowing Cleary to look more assertive in his role to give the entire team more cohesion.

Keep an eye out for Matt Burton, who impressed on debut in 2019 and will come in to replace Cleary for two games against the Knights and Warriors.

At worst, the Panthers should be three wins from their opening four games before tackling the Eels, Storm and Rabbitohs.

The controversies of 2019 appear to be behind them and they look poised to improve in 2020, but there is plenty of competition at the top end of the table.

Hot Tip: Nathan Cleary to be the competition’s highest pointscorer.

Nathan Cleary for top pointscorer in 2020