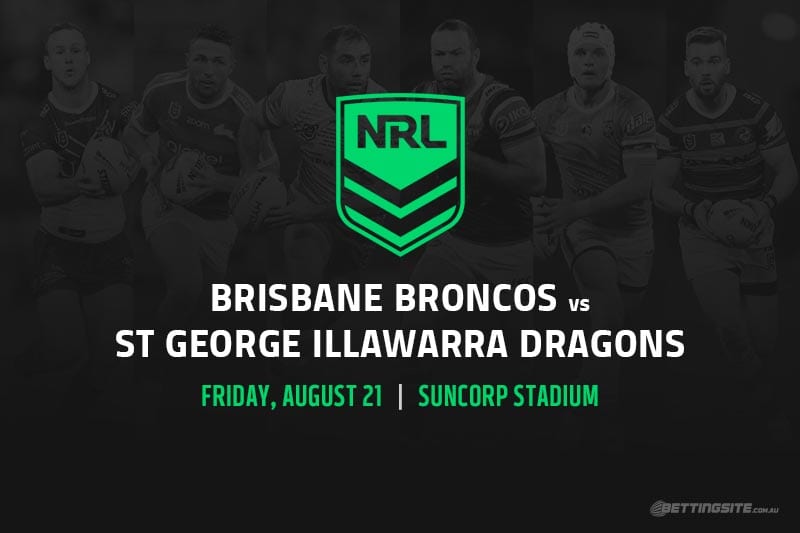 Another week goes by and the Brisbane Broncos continue to remain relevant for all the wrong reasons.

After putting together 40 good minutes in the nation’s capital, they fell apart in a 30-0 second-half drubbing at the hands of the Raiders.

Brisbane were without Anthony Seibold at the helm, but it made little difference as they fell to their 11th loss from their last 12 games.

The St George Illawarra Dragons had an emotional week, bidding farewell to club legend Paul McGregor with a gutsy 14-12 win over the Eels.

Dean Young takes over for the remainder of the season, and you just wonder if they are fools’ gold at $1.32 for this game with the potential to fall flat after what transpired last week.

Usually this would be a huge danger for the Red V, but the form line from the Broncos is just so poor and hard to ignore at this point as they come in as the $3.85 outsiders.

Brisbane’s team for this week is made up of spare-part players, with the omission of Brodie Croft jumping straight off the page.

The Dragons don’t outmatch many teams man for man across the park, but they should account for this Broncos outfit comfortably.

Brisbane may struggle to score points, but Kotoni Staggs paying $11 to score a double is a bit of value plenty of punters will consider.

Coming up against his old club, Ben Hunt at $26 could be a good outsider pick for first tryscorer.

Hunt has put together some good football in the hooking jersey, and he will no doubt be looking to exploit Brisbane’s inexperienced middle forwards.

St George’s attack in the last five weeks has looked wonderful against lower-ranked teams, while against top-four sides they’ve only averaged 15 points per games in their last two outings.

Best bets for Broncos vs Dragons