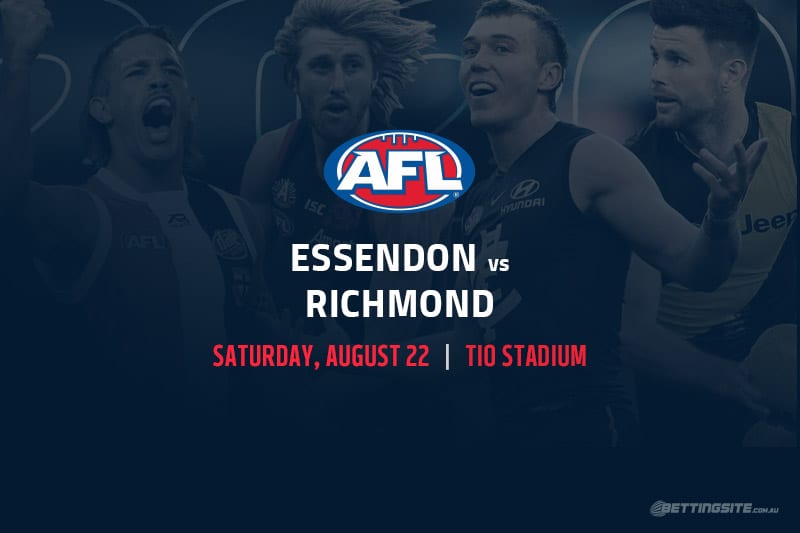 For the first time, the annual Dreamtime match will take place in the Northern Territory. It’ll see an Essendon side that has struggled through recent weeks to put consistent performances together come up against what many people call the benchmark of the competition in Richmond. It’s a game that points to a comfortable Tigers win, but anything can happen in this bizarre 2020 AFL season.

This seems one of the safer bets of the weekend. If Essendon continue to serve up the style of play like they have over the past few weeks, this Richmond side should be able to cover the line quite easily. The Tigers had a real fight on their hands for the first three quarters against the Suns, but expect the reigning premiers to come out and get the job done in convincing fashion.

One of the unsung heroes so far in season 2020 for Richmond is Jake Aarts, who has fitted in perfectly to this champion side and been hitting the scoreboard quite regularly. The mature-aged rookie had a pretty quiet night against the Suns, but we expect Aarts to bounce back and give the Essendon back line even more issues.

If there has been a positive for Essendon this year, it’s the emergence of Jordan Ridley down back. The 21-year-old defender has come down with a serious case of leather poisoning in recent weeks, averaging 19 disposals per game over the last five rounds. With the ball tipped to be down in the Bombers’ back half quite a bit on Saturday night, expect Ridley to keep racking them up throughout the night.

A big game needs a big name to come to the fore early, and there’s none bigger than Dustin Martin. He’s a player who just knows how to impact a game at the right time. Whether it’s a set shot or a snap on the run, the 2019 Norm Smith Medal winner should get us on the board nice and early.