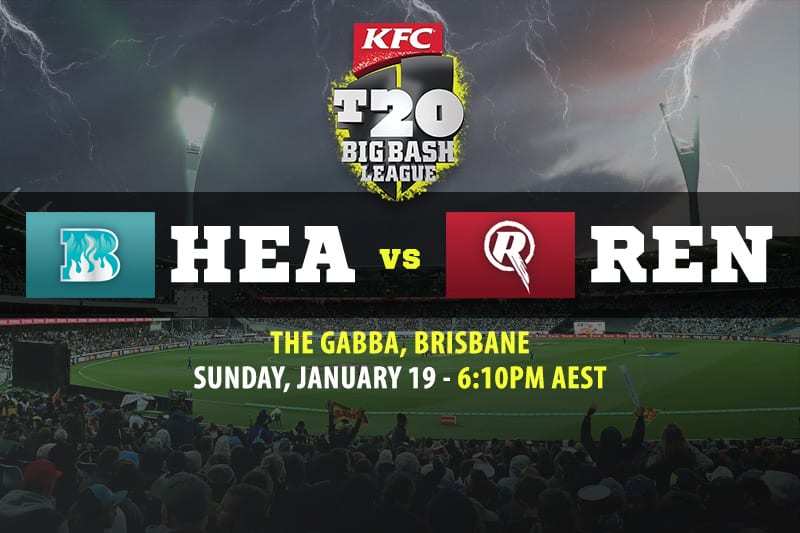 The second match of Sunday’s BBL double-header will see the Brisbane Heat take on the Melbourne Renegades at The Gabba in Brisbane.

To say this season has been a failure for the Melbourne Renegades would be a gross understatement, as the BBL08 champions are rooted to the bottom of the ladder with only one win in 10 games.

The Heat are in a very strong position to close out the season, with mid-season inclusions AB de Villiers and James Pattinson looming as key players in the BBL finals.

The Renegades cannot make the playoffs from here, so this match is little more than a stone in the road for Brisbane.

Chris Lynn Heat top runscorer @ $3.50 with Sportsbet
Chris Lynn has experienced the highest of highs and the lowest of lows this season, and we can see him hitting a high note this Sunday. The Renegades are the worst team in the competition due to the weak bowling lineup, which has been crippled further with the departure of Kane Richardson to India. Lynn will expose the Gades and make a massive score in this match.

Shaun Marsh Renegades top runscorer @ $3.20 with Sportsbet
With his good mate Aaron Finch finding some form in India, Shaun Marsh will be inspired to play out what remains of this BBL09 season with gusto. Shaun has made 12 more runs than his brother Mitchell, with the two sitting second and third respectively in the BBL batting charts. The elder Marsh will want to beat both the Heat and his brother with a big score this weekend.

James Pattinson Heat most wickets @ $5 with Sportsbet
It isn’t going to get much better for James Pattinson, who announced his return to BBL cricket with five wickets in his second game back. Pattinson is an expert at all levels of cricket and appears likely to demolish a Renegades side lacking depth in all departments.

Cameron Boyce Renegades most wickets @ $4.50 with Sportsbet
Looking at the list of Renegades bowlers makes you sad, but Cameron Boyce shines through as a player that has improved throughout his career and is now playing his best cricket. He may only take a couple of wickets, but that’s enough to be the top wicket-taker in an average Renegades attack.

Brisbane Heat to win @ $1.60 with Sportsbet
Although the BBL can produce some incredible upsets, we are confident in the Brisbane Heat at $1.60 with Sportsbet. The inclusion of AB de Villiers and James Pattinson has made the Heat into a championship contender, and we think this match is a good platform to start building momentum for the Big Bash finals.