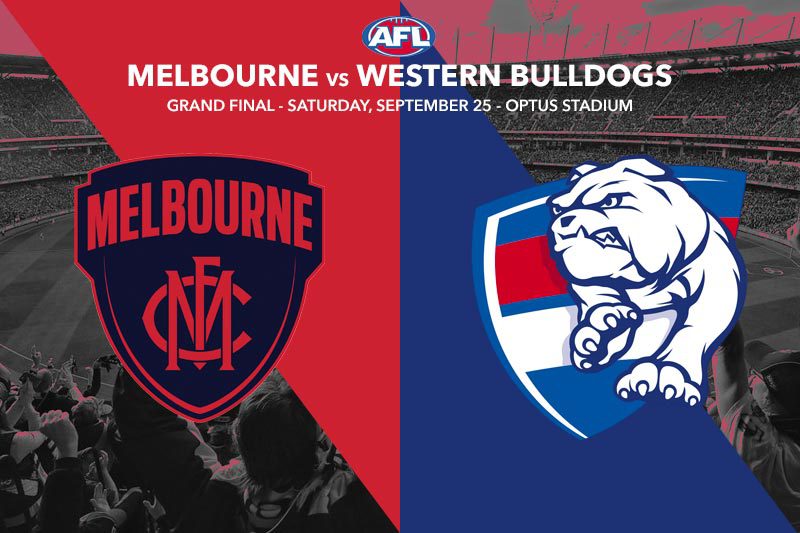 It all comes down to Saturday’s monster clash at Optus Stadium, where the Melbourne Demons and Western Bulldogs will face off in the 2021 AFL Grand Final.

Both teams breezed through their preliminary finals; the Dees belted Geelong by 83 points in a very one-sided affair, while the Bulldogs stunned the Power on their home deck in a 71-point demolition.

As has been the case in most AFL Grand Final weeks, there are a few players for both teams fighting for their spot in the starting 22.

The Demons have confirmed Steven May will play this Saturday despite a minor hamstring issue, while Charlie Spargo should be cleared to play after sustaining a minor ankle injury at training.

Luke Beveridge has a few tough decisions to make, as Cody Weightman (concussion), Alex Keath (hamstring) and Laitham Vandermeer (hamstring) have all overcome their injuries.

Jason Johannisen came into the starting side for the prelim, and the 2016 Norm Smith Medal winner is expected to hold his spot over young Vandermeer. Either Zaine Cordy or Ryan Gardiner will make way for Keath, more likely Gardiner given the Dees’ forward mix.

Simon Goodwin’s Demons will start as $1.73 favourites to end their 56-year premiership drought, leaving the Bulldogs as $2.35 outsiders with AFL betting sites.

This year’s grand finalists clashed twice during the season, in rounds 11 and 19, with each side claiming one victory apiece. The Demons won the first contest by 28 points on the back of their superior defensive structures, but the Doggies changed their offensive style for the rematch and got up by 20 points in a chaotic slugfest in the wet.

The Bulldogs noticeably directed their attacks away from Jake Lever and Steven May in round 19, while the wet conditions made it almost impossible for the Demons to utilise their excellent intercept marking. Dry weather is expected in Perth this Saturday, which will benefit all players in the air, especially Lever and May.

One area that could break the game open is the ruck battle, where Max Gawn will take on Stefan Martin and Tim English. Gawn was awarded All-Australian captaincy after another terrific season for the Demons, and his ability to push forward and kick goals will worry the Bulldogs. Gawn went ballistic in the prelim against Geelong and slotted five majors, so Martin and English will need to do the hard yards in defence.

Two of the most important players in this contest will be the architects off half-back in Christian Salem and Bailey Dale. Salem has been terrific this season for the Dees, but he only averaged 19 disposals from his last three contests against the Bulldogs. Dale, on the other hand, accumulated 30 disposals against the Dees in round 11 and followed up with 24 touches in round 19.

Although Salem and Dale do not get the same recognition as some of their high-profile teammates, they are two critical components to their respective teams. We think Dale will provide better run-and-carry on Saturday, although Salem could deal plenty of damage without getting many touches.

We believe the Melbourne Demons will finally break their premiership drought and win the 2021 AFL Grand Final. Having Max Gawn in the ruck against Stefan Martin and Tim English is a huge factor, especially considering the Melbourne captain is coming off an almighty performance in the preliminary final. It could go either way, but the ruck situation has us leaning more towards the Demons.

Bailey Dale has been a revelation for the Western Bulldogs this season, evolving from a handy half-forward into a damaging half-back. Dale is a very consistent disposal winner, averaging a career-high 24 touches per game this season. The trusty defender has surpassed 22.5 disposals in 16 of his 25 matches this year, including both games against the Demons and five of his seven losses.

We are backing Max Gawn to hit the scoreboard as the Dees end their premiership drought. The Dogs will keep Christian Salem quiet for the third time this year, while Bailey Dale will find plenty of the footy across half-back.