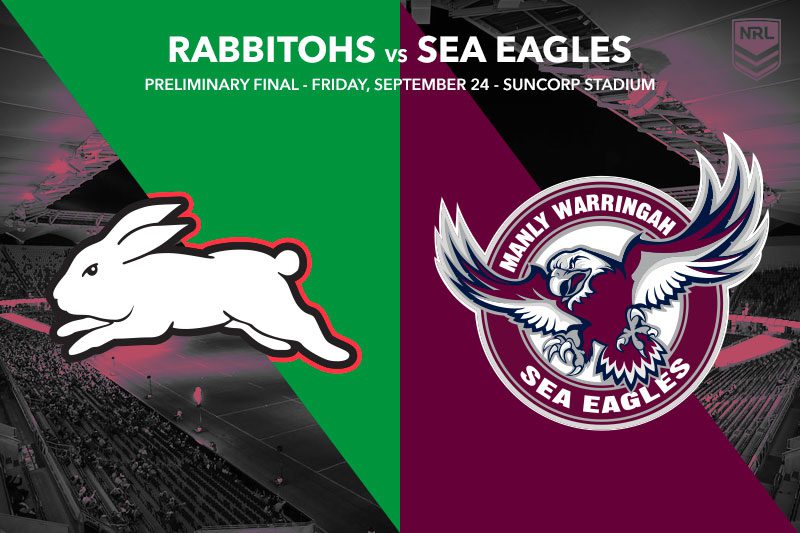 The South Sydney Rabbitohs will play the Manly Warringah Sea Eagles at Suncorp Stadium on Friday night for a place in the 2021 NRL Grand Final.

The Rabbitohs enjoyed a week off after a 16-10 win over Penrith in Week 1, and this game is the hurdle they cannot get over. This core of Souths players led by Cody Walker, Adam Reynolds, Damien Cook, Cameron Murray and Dane Gagai are playing in their fourth consecutive preliminary final, and on the previous three occasions it has ended in heartbreak. They have no injury concerns for the game and will be buoyed by just how well Blake Taaffe played as Latrell Mitchell’s replacement last time out.

Manly come into the game on the back of a 42-6 win over a busted Sydney Roosters outfit, but there is a growing suspicion that they aren’t tough enough to win against the three teams who finished above them on the ladder. They were embarrassed by the Storm in Week 1, and it showed they still have a lot of ground to make up against the likes of Penrith, Souths and Melbourne. However, as long as Manly have the best asset in rugby league in Tom Trbojevic, they will always have a puncher’s chance of not just winning this game, but also the premiership.

The Rabbitohs are the $1.77 favourite to progress to the NRL decider, while the Sea Eagles are the $2.10 outsider with online bookmakers.

Alex Johnston. Just put him in your same-game multis to score.

Now that the obvious is out of the way, let’s look at where the money might be going for Friday night. The 1-12 win for the Bunnies at $3 looks to be terrific value when you look at the margins of previous seasons. The Rabbitohs have lost three straight preliminary finals by the 1-12 margin, but this year they have had a rest instead of having to play in Week 2. That is going to be the difference between winning at losing a close game, and the desire of this group to not be on the losing end once again will drive them.

The -1.5 line at $1.90 is also a must have, as Souths have not had a single-point result either way all season. They generally win and win quite comfortably, but against Penrith they showed they have the determination to win in what was very much a ‘finals’ mindset.

Cody Walker crossed against the Panthers and will attract a ton of interest to score at any time, while Jaxson Paulo on the right wing will be another who might give the punters some joy. Dane Gagai is departing at season’s end and will be determined to make sure the 2021 NRL Grand Final is his last game, so expect him to play like ‘Queensland winger Gagai’ and score a try at left centre.

Like Johnston for Souths, just put down Tom Trbojevic, Jason Saab and Reuben Garrick to score tries for the Manly Sea Eagles. Both teams have their obvious strengths, and the ‘tries scored’ category tells punters all they need to know about where to put their money. Aside from the three usual suspects, Haumole Olakau’atu and Brad Parker shape up as the best tryscoring options.

Manly do feel a bit short as the underdog at $2.10, but they could drift slightly the longer the week goes. Against the Rabbitohs, Panthers and Melbourne they are 0-5 this season, while against every other club they are 17-3, which backs up Ryan Girdler’s claims of them being flat-track bullies.

The +1.5 line also feels wrong when you look at the form against the big three. The closest they’ve got was a 10-point loss to Melbourne in Round 21, and even on that night the scoreboard flattered them. Avoid like the plague.

It boils down to the battle of the halfbacks.

Adam Reynolds is playing in what he hopes isn’t his last game for his beloved South Sydney Rabbitohs before moving to the Broncos in 2022, and a Grand Final appearance would be a pretty good way to finish his decade-long tenure as an NRL player for the club. If Reynolds has his kicking boots on and can build pressure with repeat sets and field position, Manly will crack. He has a good arsenal of kicks that can get his side out of trouble and give his defence a chance to set the tone, or he has the icing on the cake with the best short-kicking game in the competition.

Daly Cherry-Evans does his best work as a runner, but he is also a 40/20 threat and loves to go for it on tackles three and four. The setup for Morgan Harper’s try last week in the first half was DCE at his best, picking apart a short side that had defenders out of position before throwing the perfect cutout pass to put Jason Saab into space. He plays the blindside better than any halfback in the competition and will no doubt try to catch Souths napping.

This battle decides the game. If DCE plays a blinder, it brings the Sea Eagles right into the game. If he doesn’t, they won’t have enough outside of Tom Trbojevic to trouble the Bunnies.

South Sydney will finally crack through and end the prelim curse to progress to the 2021 NRL Grand Final. Cody Walker will star as the Bunnies win by exactly 12 points.

Rabbitohs 1-12 with Cody Walker, Alex Johnston and Tom Trbojevic scoring a try each will get you $21 at Sportsbet.