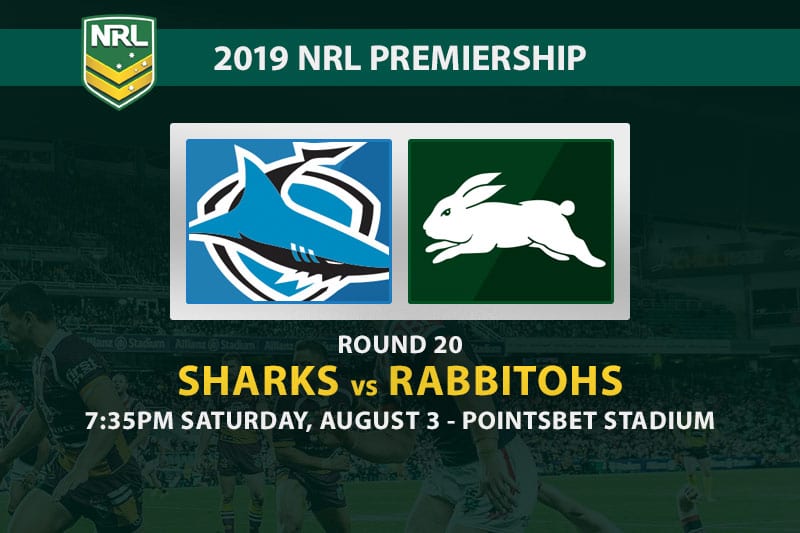 Second plays 10th on Saturday night as the Cronulla Sharks and the South Sydney Rabbitohs lock fangs at PointsBet Stadium.

Cronulla have endured a rotten couple of months, but last week’s clutch win over North Queensland leaves them only a point outside the top eight.

With Brisbane and Newcastle both facing tough assignments this weekend, a victory over the Bunnies would launch the Sharks back into the finals frame.

Souths have had a streaky season, to say the least, yet they are a game clear in second place and cruising towards a top-four finish.

After surviving a late scare from St George Illawarra last week, Bunnies boss Wayne Bennett will want to see an 80-minute display as his charges aim for a fourth consecutive win.

Matt Moylan returns at fullback, pushing Josh Dugan to the wing and Ronaldo Mulitalo out of the side. Wade Graham reclaims his place in the second row, which sees Kurt Capewell move to the bench. Andrew Fifita is named on the interchange after serving a ban, while Blayke Brailey and Billy Magoulias are relegated to the reserves.

Sam Burgess rejoins the forward pack after five weeks out with a shoulder infection and Liam Knight returns via the interchange after seeing out a suspension. Ethan Lowe drops out of the starting side and onto the bench, while Dean Britt and Jaydn Su’A are both demoted to the emergencies.

Dane Gagai – This man has gone on a tryscoring tear since shifting from the centres to the wing a few weeks back. Gagai scored the first against the Dragons and went on to bag a brace, so it is with good reason he is Sportsbet’s $8.50 favourite for the opener.

Josh Dugan – Cronulla’s fix-it man in the back half has notched nine tries this season, including five in as many games when starting on the wing. Given those numbers, Dugan’s $3.30 anytime tryscorer odds at Sportsbet look like serious value for money.

Sharks vs Rabbitohs NRL Round 20 predictions

While neither of these teams have looked especially good over the past few weeks, the Bunnies have found a way to grind out results. The Sharks have some big names back on the park, but Souths will find a way to take the points in the Shire.