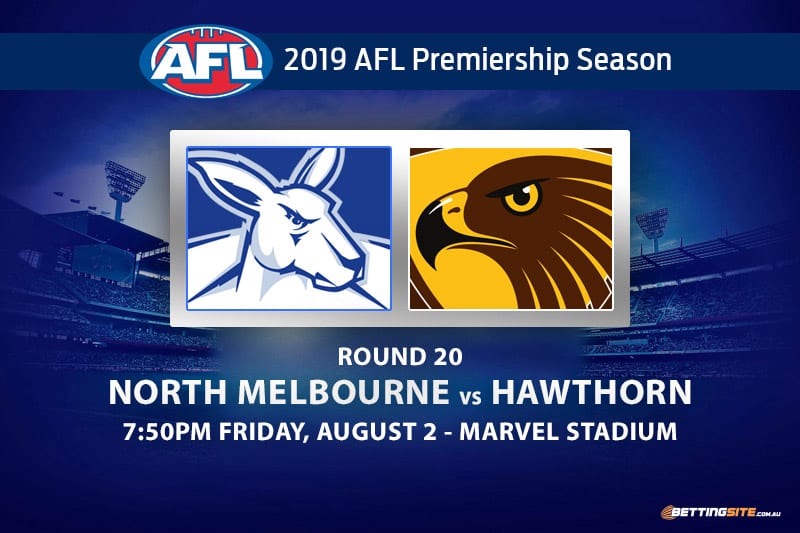 The North Melbourne Kangaroos and Hawthorn Hawks will clash at Marvel Stadium to kickstart AFL Round 20.

Friday night matches are often ones to keep an eye on, and this week is no exception as the odds are dead-even two nights out from the clash.

Both clubs are still a slight chance to make the finals this season, with the Hawks more likely than the Roos if they win this match.

Midfield bulls Ben Cunnington and Jaeger O’Meara will face off in the guts in what will be a thrilling brawl, while classy wingmen Jared Polec and Isaac Smith will battle on the outside.

More great matchups include James Sicily against Ben Brown in North’s forward 50, Todd Goldstein against Ben McEvoy in the ruck and young stars Luke Davies-Uniacke and James Worpel in the middle.

These teams fit really well against one another and will provide a good contest, similar to what was bought to the table earlier in the season.

The Roos burst out to an early lead in that game before the Hawks worked them over in the second half to secure the victory.

If this week’s match is anything like the previous games, it will be a brilliant Friday night of footy.

Ben Cunnington to get 25 disposals @ $1.57 with Sportsbet
The strongest man in the middle of the ground is always Cunnington for the Roos. The North no.10 is one of the toughest and hardest-to-move midfielders in the competition and accumulates plenty of ball with his clever positioning. Cunnington had over 30 against the Hawks in round three and will go close to that again.

James Sicily to get 20 disposals @ $1.80
Sicily plays right on the edge but always finds a way to intercept and rebound out of defence. The versatile 24-year-old can take a mark and kicks the ball well, which is why the Hawks often handball to him exiting 50. Sicily is going at 21.3 touches per game this year and averages 22.5 against the Roos.

Jack Ziebell to kick two goals – Best odds at Ladbrokes
The North Melbourne captain has enjoyed his footy since Rhyce Shaw took over the coaching reins midway through the season. Ziebell was quiet in the loss to West Coast last week, but he booted two goals against the Hawks in round three and will replicate that effort in the return fixture.

Luke Breust to kick two goals
Luke Breust was clearly best on ground when these teams met earlier in the year, kicking five majors to push the Hawks over the line. Breust hasn’t kicked a goal in the past two matches and will want to bury that barren run with a bag against the Roos.

Either team by 15 points or less @ $2.50 with Sportsbet
When the betting is dead-even and both sides are playing pretty well, the safest bet is to back a narrow margin either way. A close match is usually a good match, and all signs point to a tight tussle where neither side can kick away by more than a coupe of goals.

We are leaning towards North to win in a very close match, but Ben Brown needs to find a way to impact the game early if the Roos are to get over the line.