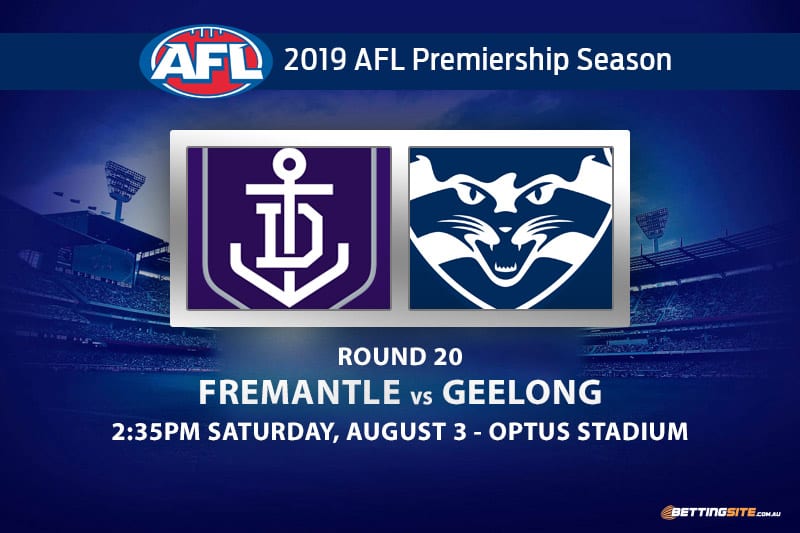 A massive clash in the west is slated for Saturday afternoon as the Fremantle Dockers play host to the Geelong Cats.

Before injuries ruined the Dockers’ chance at finals this season, they were well inside the top eight and pushing plenty of teams, even beating the Magpies at the MCG.

Geelong has had a glorious run without too many injuries this season, putting them in an excellent position to win this year’s AFL Premiership cup.

Luke Ryan was enjoying a terrific season for the Dockers before injuring his hamstring against the Bulldogs last week, but now the Freo defence is struggling for man power with fullback Alex Pearce also out.

Fremantle has not beaten the Cats since 2015 and would have to produce a miraculous effort to get the win this week, but it is not impossible.

If Fyfe is feeling good heading into the weekend, the Cats will have their hands full.

Ed Langdon to get 20 disposals @ $1.50 with Sportsbet
Langdon has tallied less than 20 disposals only three times this season. Although he isn’t in the best of form, he knows how to find the footy and will be a great asset for the Dockers on their home deck. His raw speed makes him hard to defend and allows him to find plenty of outside ball.

Patrick Dangerfield to get 25 disposals @ $1.50
The Cats superstar has enjoyed the midfield mix this season, with Tim Kelly taking on more weight and allowing Danger to slip forward. However, one suspects Cats coach Chris Scott will play Dangerfield in the guts as often as possible, as he is one of the few players that can beat Nat Fyfe in the middle.

Fremantle vs Geelong Round 20 goalscorer odds

Michael Walters to kick two goals – Best odds at Ladbrokes
Walters was playing footy for fun a few weeks ago, kicking bags of goals and winning matches off his own boot, but it has been a few weeks since he last took a game by the horns. The matchup against the Cats should favour the smarts and nous of Sonny, who loves to kick goals in Perth.

Esava Ratugolea to kick two goals
With Luke Ryan and Alex Pearce out for the Dockers, Geelong’s big forwards are going to have a field day. Sav has not kicked many goals this year, but in this situation his coach will make the message very clear that he needs to hit the scoreboard.

Total match points under 146.5 @ $1.88 with Sportsbet
Most matches that Fremantle has played in this season have gone under the total match points line, mainly due to Ross Lyon’s extremely defensive coaching style. With rain expected to fall during the day in Perth, you can expect another low-scoring affair from the Dockers and Cats.

Fremantle vs Geelong Round 20 predictions

Geelong will win this match and use it to build momentum heading into a difficult home stretch. Fremantle has too many injuries to match it with the top team on the AFL ladder.