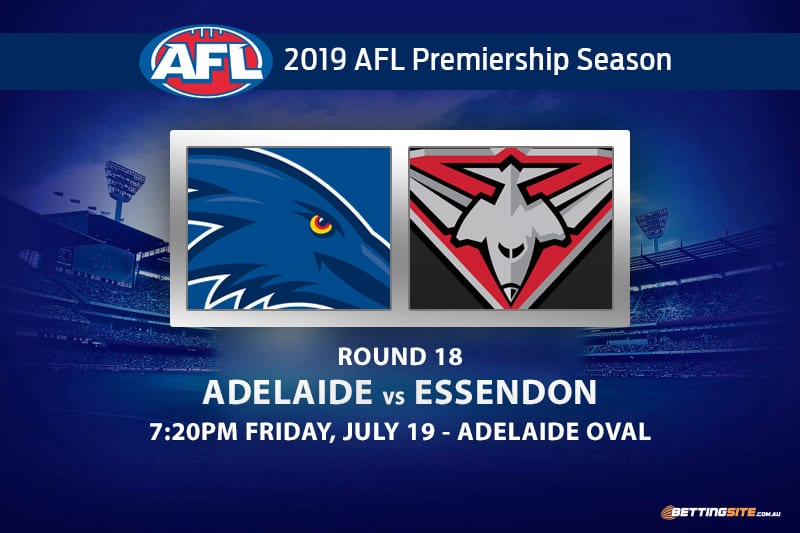 The first match of AFL Round 18 is a huge clash between seventh and eighth position on the ladder.

The Adelaide Crows and the Essendon Bombers have played well enough to find themselves inside the top eight after 17 rounds of footy, but the loser of this match could fall outside the finals places this week.

Adelaide beat the Gold Coast Suns by almost 100 points last week in a clinical display, although it was not a very watchable affair for footy fans.

Essendon’s tussle with North Melbourne was probably the best contest of the round, ending with a memorable match-winning goal from Anthony McDonald-Tipungwuti with only seconds left on the clock.

These sides have played in some lopsided fixtures in recent times, with the Crows winning by margins as big as 112, 82, 65 and 43 points, although Essendon won the most recent clash by just two goals.

Injuries to both Dyson Heppell and Michael Hurley, who had surgery on his shoulder during the week, are going to take their toll on the Bombers.

Wayne Milera to get 20 disposals @ $1.50 with Sportsbet
The young half-back has been thrown around the ground in recent weeks, but he has found the most footy when he is in the midfield. Last week Milera had plenty of the ball while also winning lots of contests. He is in form and will play another good game this week.

Dylan Shiel to get 25 disposals @ $1.91
Of all the Bombers midfielders, Shiel is the most damaging when he is on. If he can get lots of the ball through the middle, it will increase Essendon’s chances significantly. The big-money recruit from Greater Western Sydney was poor last week and needs to bounce back.

Crows vs Bombers Round 18 goalscorer betting

Josh Jenkins to kick two goals – Best odds at Ladbrokes
Jenkins has a good record against his former club and will expose the absence of Michael Hurley, who came off worse for wear from a Cameron Zurhaar bump in Essendon’s win over the Roos. With Cale Hooker looking tired and Patrick Ambrose just returning from an injury layoff, the Dons may struggle to match up on Jenkins.

Adelaide vs Essendon Round 18 wire-to-wire odds

Adelaide lead at every quarter @ $2.20
This match has plenty of factors pointing towards the Crows. Don Pyke’s men won by over 90 points last week and have the home ground advantage, while the Bombers will be without two of their leaders in Dyson Heppell and Michael Hurley.

Crows vs Bombers Round 18 match betting

The Crows will want to make a statement this week and bolster their claim for a berth in the 2019 AFL Finals. The Bombers have scraped together a few wins despite some inconsistent displays and will struggle away from home, as they did against West Coast a few weeks back.