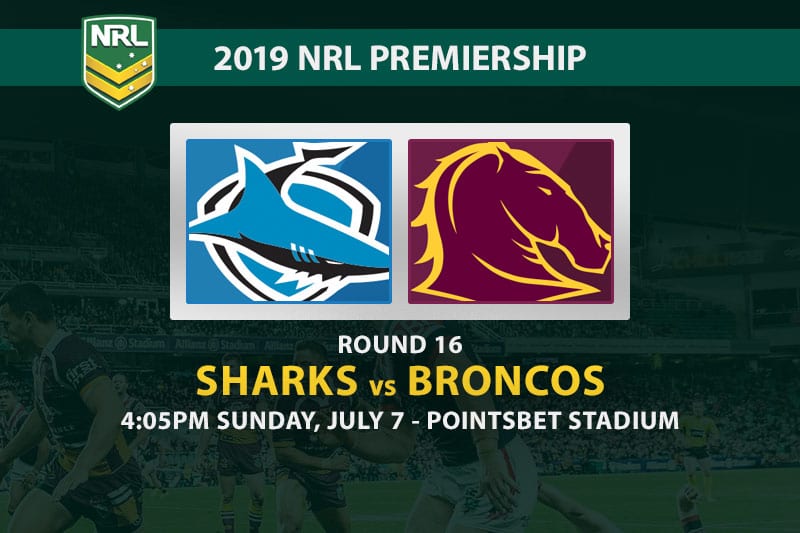 One cannot help but think Brisbane coach Anthony Seibold would trade anyone or anything to have a bye this week.

The Broncos lost two more troops to injury in last week’s defeat to the Newcastle Knights, while another four are unavailable with the State of Origin decider coming up.

With only Canterbury and Gold Coast keeping them off the bottom of the NRL ladder, Brissie’s finals hopes are all but extinguished.

Cronulla are on track to make an appearance in September, but they missed a gilt-edged opportunity last week when they went down to the Bulldogs.

That result alone should have the Sharkies fired up for Sunday’s round-closing fixture at PointsBet Stadium.

Kurt Capewell comes into the starting lineup with NSW second-rower Wade Graham away for Origin III. Aaron Woods also steps into the forward pack after manning the bench last week. Jack Williams drops to the interchange alongside Kyle Flanagan, who has not played seniors since the win over Parramatta on June 8.

Richie Kennar and Anthony Milford are both out injured, while David Fifita, Matt Gillett, Joe Ofahengaue and Corey Oates are busy with rep duties. Xavier Coates and Herbie Farnworth debut on the wings, Thomas Flegler and Alex Glenn join the forward pack, and Shaun Fensom, Rhys Kennedy and James Segeyaro fill out the bench.

Josh Dugan – The versatile back has hit a purple patch, scoring four tries in his last three games. With Brisbane blooding two rookies on the wings, the experienced Dugan should fancy his chances of finding the line.

Herbie Farnworth – Brisbane’s newest no.2 did trials with Manchester United before moving to Australia in his mid-teens, so Broncos fans have every right to expect some fancy footwork from the Lancashire lad this Sunday.

Sharks vs Broncos NRL Round 16 predictions

While Cronulla are regaining their stars week by week, a combination of injuries and Origin has ravaged the Broncos. The men in maroon are in ordinary touch anyway, so all signs point to a big win for the home side at Shark Park.