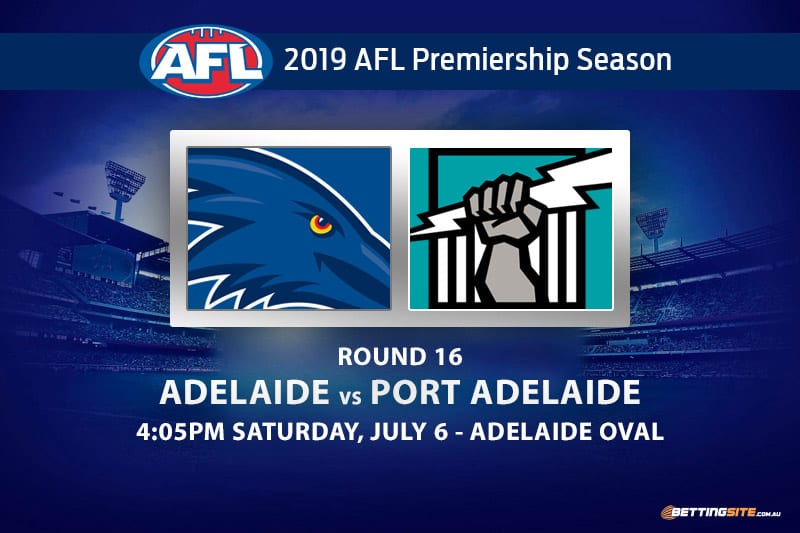 The second South Australian Showdown of the 2019 AFL Premiership season is scheduled to take place this Saturday afternoon at the Adelaide Oval.

Both the Crows and Power are looking to make the finals in 2019, and this match may well determine which team has the upper hand come September.

With Charlie Dixon back in the forward half for the Power, the structure of the side looks much better.

Adelaide is playing good football but was not good enough against the Cats last week, so Don Pyke’s men will be eager to bounce back.

Both sides are in decent form and will bring their best in a fixture that rarely fails to deliver.

Rory Sloane to get 25 disposals @ $1.40
The co-captain for the Crows has run into some excellent form of late, with his last two matches delivering 28 and 30 disposals. When the Crows need a player to stand up, Sloane leads by example. He will match up well on Port’s top midfield man this year, Travis Boak.

Darcy Byrne-Jones to get 20 disposals @ $1.57
Byrne-Jones has thoroughly enjoyed his footy since being let off the chain. Port coach Ken Hinkley has given the running half-back a licence to go up the ground and expose his direct opponent on offence. This dangerous tactic allows Byrne-Jones to get plenty of the ball.

Crows vs Power Round 16 goalkicking tips

Taylor Walker to kick two goals – Best odds at Ladbrokes
The other captain for the Crows is slowly winning back his supporters after an ordinary start to the season. ‘Tex’ has kicked six goals in the last three weeks and has looked far more comfortable than he did in the first half of the year. He will get opportunities early to give his Crows a good start.

Connor Rozee to kick two goals
The young star has drifted out of the public eye somewhat after a couple of quiet weeks. Before this he was in the conversation for the 2019 AFL Rising Star, and now is the time to win back his critics. Rozee kicked one goal in round eight and will go one better this week.

Matt Crouch @ $9
Matt Crouch is one of the most consistent performers in the AFL when fit, and he will be centre stage this week. The battle will be won in the middle and if Crouch can dominate that department, he will win the Showdown Medal.

The Crows are higher on the ladder and need to respond after last week’s game. If Matt and Brad Crouch can get on top in the guts, Adelaide will be in the box seat.