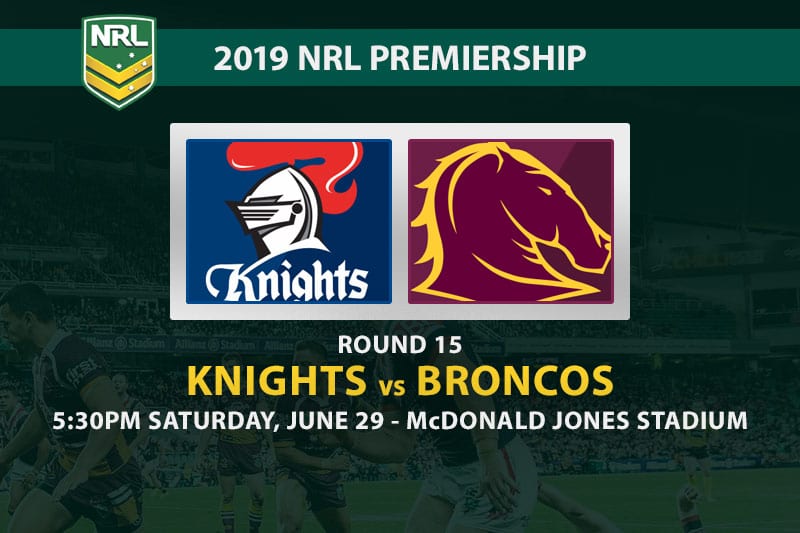 Saturday’s NRL fixture at McDonald Jones Stadium sees two sides looking to get back in the winners’ circle.

After six games without defeat, the Newcastle Knights were brought crashing back to earth two weeks ago when Melbourne smashed them 34-4 at AAMI Park.

Nathan Brown’s men are still in the hunt for finals, however, and could close the gap on the top four with a home win this weekend.

The Brisbane Broncos looked like they had turned the corner when they beat Manly and Sydney in a run of three consecutive wins, but losses to Gold Coast and Parramatta have burst the bubble.

That leaves Anthony Seibold’s men two games outside the top eight in 12th place, so things need to click soon if they plan to play finals.

Sione Mata’utia comes in for the suspended Mitch Barnett, with Josh King filling out the bench. State of Origin stars Tim Glasby, Kalyn Ponga and Daniel Saifiti are all slated to start, while David Klemmer is named in the reserves as he works back from a wrist injury. Also in the extended squad is Aidan Guerra, who has not featured since round five.

Andrew McCullough is set to wear the no.9 jersey, which sees Jake Turpin drop to the interchange. Origin rep Joe Ofahengaue is also destined to ride the pine and Payne Haas will play despite concerns over his hamstring. Richard Kennar replaces Jamayne Isaako on the wing, while Jaydn S’uA is listed among the reserves.

Ponga’s incredible tryscoring run came to an end in the loss to Melbourne, but he remains the chief threat in Newcastle’s back half. He also offers excellent value compared to his less prolific teammates.

Brisbane’s big winger notched his 10th try of the season in the defeat to Parra last time out. He is the favourite for a reason and should find the line regardless of whether or not the Broncos get up.

Knights vs Broncos NRL Round 15 predictions

This is the kind of game Newcastle need to win if they hope to make an impact in September. The Broncos have a lot of issues to iron out, so this is an excellent opportunity for the Knights to put up a big score at home.