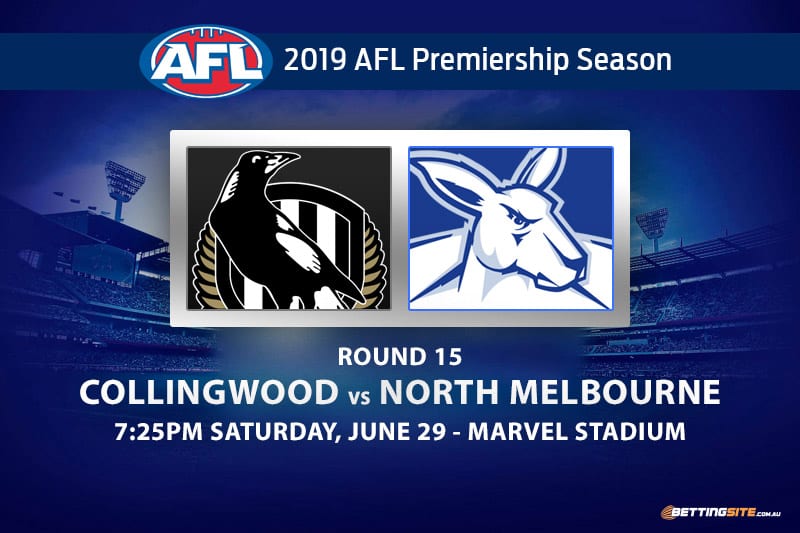 Two teams that have never been friendly with one another will do battle at Marvel Stadium this Saturday night.

The Collingwood Magpies and the North Melbourne Kangaroos have shared a slight hatred for one another over the past few years due to a combination of brawls and trades.

Rhyce Shaw played 94 games for the Magpies, but this week he is hoping to plot their downfall from the North Melbourne coach’s box.

Collingwood has won the last two encounters by an average of 60 points, so the Roos will approach this game with a big point to prove.

Three of the top four disposal gatherers for North in 2018 will not be playing this week, including Shaun Higgins, who is out with an AC joint injury.

If the Pies play the same way they did against the Dogs last week, then the Roos will be in with a chance.

Scott Pendlebury to get 30 disposals @ $2.63
The Collingwood captain has had a season of ups and downs. Some matches he has been the difference and won the Magpies the match, but then other weeks he has not been up to scratch. Last week he was unable to get involved and showed visual disappointment in himself. Pendlebury will bounce back and help his Magpies this week.

Jack Ziebell to get 25 disposals @ $1.62
Since Ziebell moved back into the midfield, the Kangaroos have been a much better football team. Now that he has been there for the last four weeks, winning the ball has become second nature. He still has great odds despite averaging 24 disposals across the last five games, including a 35-disposal match.

Collingwood to kick over 13.5 goals @ $1.96 at Sportsbet
Even without young star Jaidyn Stephenson, the Collingwood Magpies have been able to produce enough shots on goal to kick large totals. Last week was the first time without Stephenson and the Pies went inside 50 enough to kick 13 goals. If Jordan De Goey kicks straight this week, the target will be broken by 3QT.

North Melbourne to kick under 10.5 goals @ $1.91
Despite a calf injury to Jeremy Howe, the Magpies will be able to form a strong enough backline to keep the Roos to a low total. Ben Brown is the most dangerous forward for North and Jordan Roughead will be able to stop his straight leads. The Pies backline needs to redeem itself after a poor performance last week.

Jordan De Goey to kick five goals @ $4.33
The superstar forward was far from stardom last week after an extremely poor display in front of goal. Kicking out of bounds on the full multiple times and not making the distance from inside 50 cost De Goey a potential bag of goals. North Melbourne has no defender able to stop De Goey, so he will not miss out this time around.

Pies vs Roos Round 15 match predictions

The Pies are still trying to find their best form in 2019 and after a public roasting from Nathan Buckley, they will be very close to finding it this week.