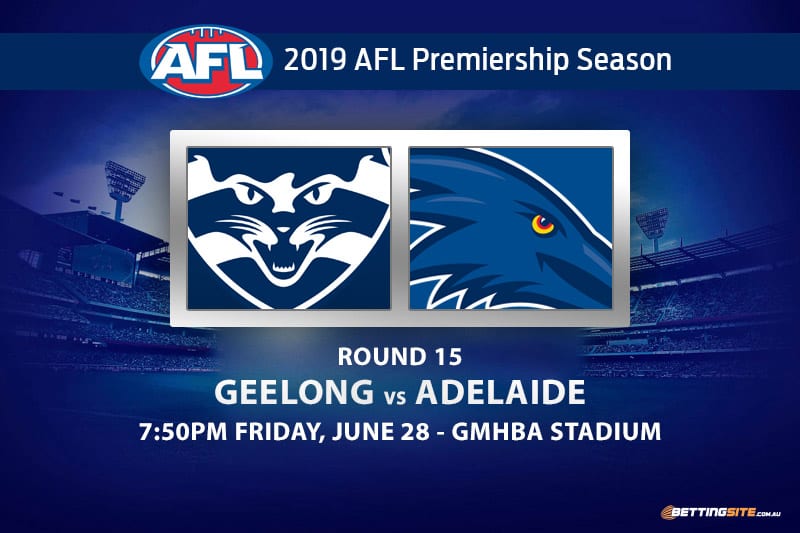 Two top-eight sides will clash at GMHBA Stadium on Friday night as the Geelong Cats host the Adelaide Crows.

Although the Cats went down to Port Adelaide last week, they still sit one match clear on top of the AFL ladder.

As all the bye rounds have been completed, it is impressive that the Crows have won enough matches to sit fifth in the table.

The trip from Adelaide to Geelong is one of the shorter interstate jaunts in the competition, but the home field advantage is still important for the Cats.

A win to the Crows would put them right into contention in AFL Premiership betting, although they are yet to take a genuine scalp outside of South Australia.

Patrick Dangerfield to get 30 disposals @ $2.10
The team Dangerfield wants to beat more than any other is the Adelaide Crows. Paddy has gone to another level since leaving South Australia, winning the Brownlow Medal in 2016 and becoming one of the best players in the AFL. He will win plenty of the footy against his old mates.

Brad Crouch to get 30 disposals @ $1.62
The older Crouch brother has been terrific in his comeback season from an abdominal injury. Everyone’s focus goes to Matt Crouch at the beginning of each game, but Brad is just as good when it comes to winning the ball. The Cats will back their midfield against the Crows, meaning no tagger will target the Adelaide no.2 this week.

Cats vs Crows Round 15 goalkicking tips

Gary Ablett to kick two goals – Best odds at Ladbrokes.com.au
Kicking goals is something Ablett has come accustomed to since moving from the midfield to the forward half of the ground. In the last three matches he has played, Gaz Jr has managed to kick six goals. The Crows small defenders are very good offensively, but they can lack attention to their opposition, which is a sin against Ablett. He will hit the scoreboard in this match.

Taylor Walker to kick two goals
With Josh Jenkins going down with a horrific knee injury in the recent win over Richmond, Walker needs to be up for the challenge against the Cats this week. He has booted five goals across his last two matches, when Jenkins was able to kick seven. It would be silly not to back in Tex in the absence of Jenkins.

Over 157.5 points @ $1.88
The slim build of GMHBA Stadium leads to many teams going through the corridor, which is the most dangerous style of play. Whether it’s a successful attack or a costly turnover, playing down the middle often results in a goal to either side. If the Crows play dangerously, the match will be high scoring.

Cats vs Crows Round 15 match predictions

Chris Scott and his charges will make a statement this week. The Cats will bounce back after the loss to Port and beat the Crows comfortably.