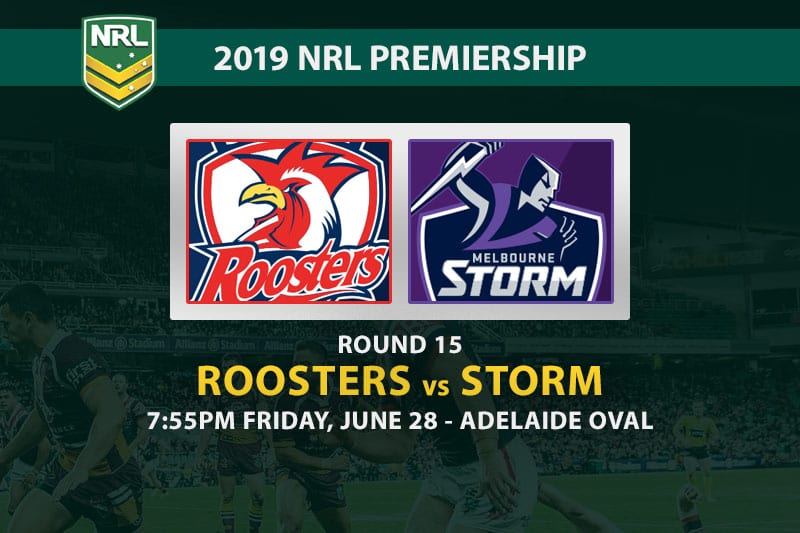 It is with good reason that Friday’s clash between the Sydney Roosters and the Melbourne Storm is the most-anticipated match of the 2019 NRL Premiership home-and-away season.

A single point separated these two sides when they met at Adelaide Oval in 2017, with Mitchell Pearce nailing the decisive field goal for the Chooks in extra time.

The margin was the same when they resumed hostilities in the City of Churches a year later, this time with Storm skipper Cameron Smith splitting the posts at the death.

Now the 2018 grand finalists return to South Australia in a grudge match that could determine who finishes top of the table come September.

Melbourne are two games clear in first place after five wins in a row, while Sydney are locked on 20 points with the second-placed Rabbitohs.

There were concerns that some big names might sit out on the back of a jam-packed representative round, but both sides have all their State of Origin stars and international reps available.

James Tedesco returns at fullback after taking a breather in the lead-up to Origin II, which sees Joseph Manu move to the centres and Mitch Aubusson back on the bench. Isaac Liu shifts to prop to accommodate Zane Tetevano at lock, while Lindsay Collins fills out the interchange and Sam Verrills drops out of the squad.

Coach Craig Bellamy has made no changes to the Storm side that destroyed an in-form Newcastle last time out. Origin reps Josh Addo-Carr, Will Chambers, Dale Finucane, Felise Kaufusi and Cameron Munster are all named to start.

Is there a single man in the NRL with more to prove? Mitchell was cruelly dumped from the NSW Origin squad after a sloppy showing in game one, but his brace against Canterbury last time out suggests that will only make him more dangerous on the domestic stage.

While Josh Addo-Carr is Melbourne’s go-to guy on the wing these days, Vunivalu is building up a nice run of scoring form after a barren patch early in the year. The Fijian has three tries in his last five games and might be a little fresher than JAC after Origin II.

This is going to be a close one – that much is all but certain. Even when the Roosters bolted out to a 20-0 lead in round six, they only got home by a point. Melbourne are playing far better footy now than they were back in April and have the luxury of a fresh Cam Smith, which might be just enough to tip the balance in their favour.