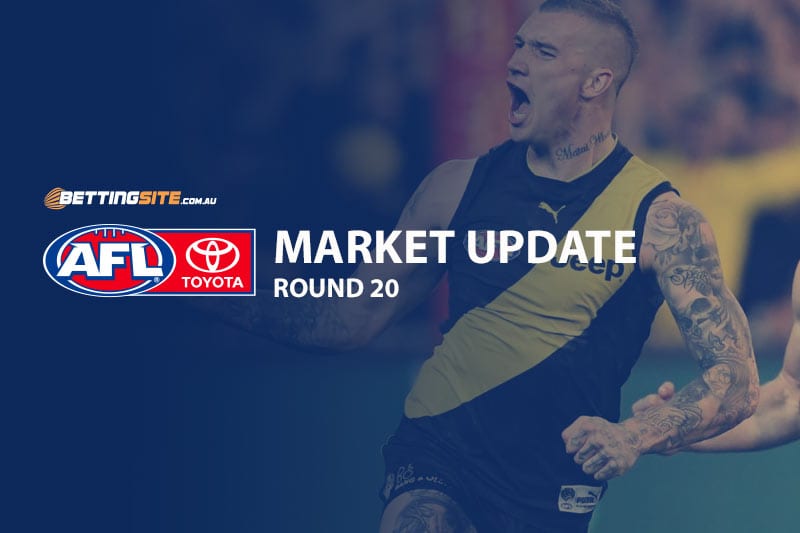 With the race for finals getting more congested by the day, AFL Round 20 features a handful of crucial matches that will shape the competition.

Each team has only four more matches scheduled before the regular season finishes, and this week’s games will be worth keeping an eye on, no matter what colours you support.

Let’s see how the match odds are stacking up at Sportsbet.com.au.

The scene is set for yet another Friday night blockbuster. The Roos and Hawks are the two sides that have Tasmania as a second home, but they will meet at Marvel Stadium this week. The betting is very even with North at $1.85 and Hawthorn at $1.96. See our North Melbourne vs Hawthorn preview here.

After an extravagant come-from-behind victory over the Suns, Essendon will now face the Power at Marvel Stadium. Given they are the away side and a few spots lower on the ladder, the Power are paying $2.60 to beat the $1.48 Bombers.

Big brother against little brother was how this clash used to be portrayed, but since the GWS Giants have been the better side over the past three seasons, it is now just a match between two proud football clubs. The $1.33 Giants are favoured over the $3.25 Swans at this point in time.

In what could be a very interesting encounter, the Dockers will look to make up for a poor month of footy when they host the Geelong Cats at Optus Stadium on Saturday afternoon. The Cats are $1.41 favourites to beat their hosts, who are at $2.85. See our Fremantle vs Geelong preview here.

This time last season, the Demons were sixth on the ladder with 11 wins and the Tigers were on top with 14. Times have changed and Melbourne is back to its old ways, 17th on the ladder with just five victories all season. The in-form Tigers are $1.20 to take out the $4.40 Dees.

One team has nothing to lose and the other cannot afford to lose. The Crows need to win in order to stay in the race for finals, while the Saints are just playing to give themselves hope going into next season. Adelaide is hosting and priced at $1.37, giving the visitors $3.05 odds to upset.

If any team needs to play Gold Coast this week, it’s the Magpies. The Suns haven’t won since round four, despite pushing Essendon close last Sunday, which is why they are priced at $5. That leaves Collingwood with a mere $1.16 for a much-needed win at the MCG.

The Blues were a rabble when David Teague took over as coach, but now they are matching it with teams that hope to play finals this year. The Eagles will be visiting favourites at $1.35, giving the home side $3.12 in pursuit of a sixth consecutive win.

Don’t make any plans this upcoming Sunday afternoon because the Brisbane Lions and Western Bulldogs will face off at the Gabba. If the $3.12 Bulldogs win, they could insert themselves into the premiership conversation, while the $1.35 Lions are going for seven straight victories. See our Lions vs Bulldogs preview here.

A new favourite has finally usurped the Geelong Cats, who have led the AFL 2019 betting markets for almost the entire season. The Tigers are outright top at $3.75 after their win over Collingwood, with the Pies moving out to $13 after more injuries. The Lions are still roaring at $7.50, while the Bulldogs have come from the clouds as the eighth-best option at $67 after being priced at $151 less than a month ago.