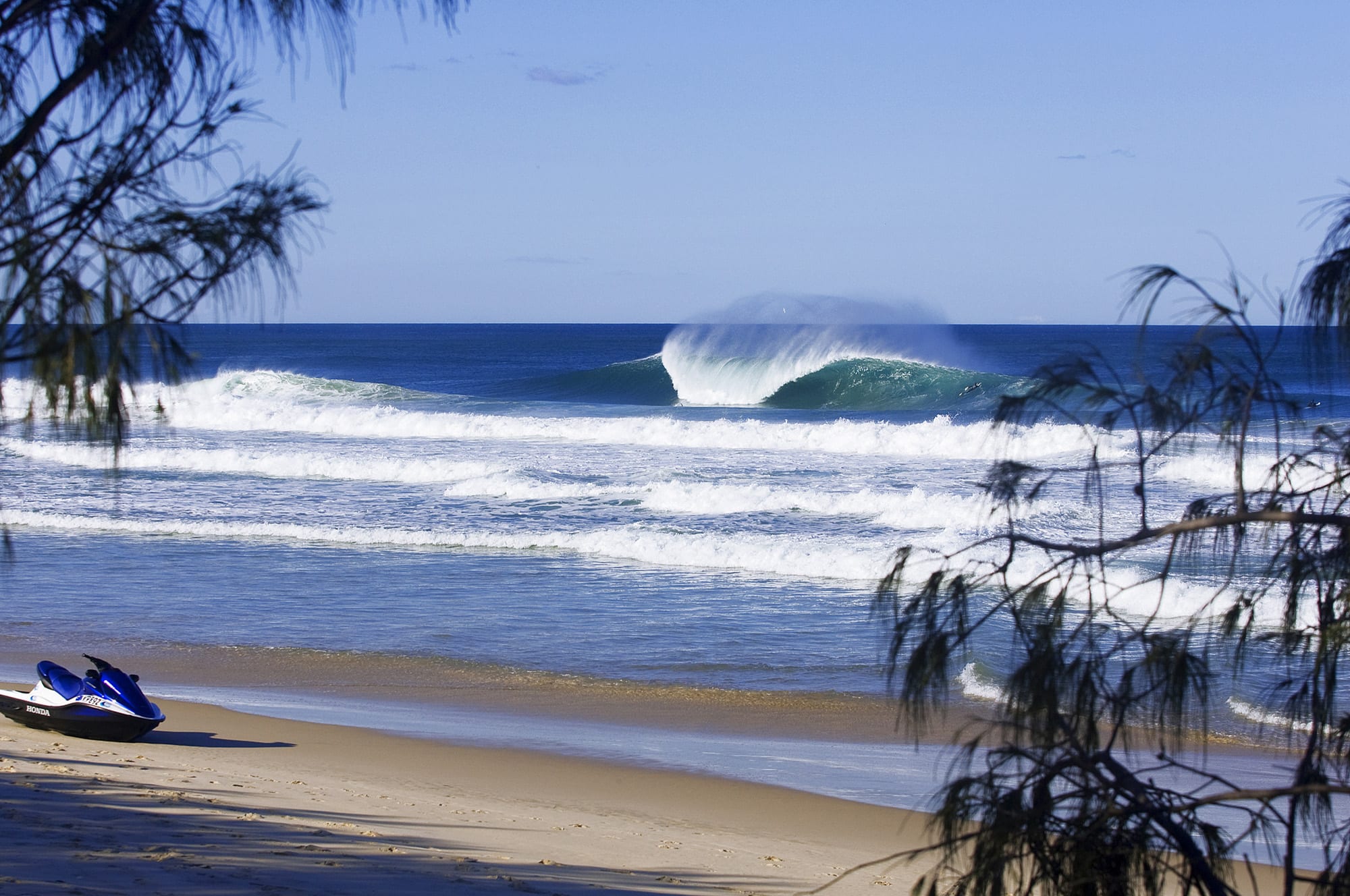 The World Surf League (WSL) is excited to announce that live professional surfing will return this September and October through the Australian Grand Slam of Surfing specialty events. These two broadcast-only ‘strike mission’ style events will play out over a two-month waiting period and will crown the most dominant surfers in the best possible waves.

The Australian Grand Slam of Surfing is set to reignite pro surfing in 2020 with the country’s top WSL Championship Tour competitors doing battle at the Boost Mobile Pro Gold Coast on South Stradbroke Island (Queensland), and the Margaret River Pro (Western Australia). With each event only needing two days to run and having a two month waiting period, WSL event directors can pinpoint the best conditions for each location guaranteeing the best surfing in the best waves possible. There is plenty at stake across the series with overall men’s and women’s series winners receiving $20,000 AUD each, which will go to a charity of their choice.

Both events will be broadcast live across WSL platforms and the 7 Network and Fox Sports.

Seven-time WSL World Champion Stephanie Gilmore (AUS) is looking forward to getting into a competition jersey for the first time in 2020.

“It’s been a long, unexpected break for everyone with so many unknowns for the year,” Gilmore said. “It feels great to finally get some events in the near future to get back in the competitive groove. I’ve been seeing a lot of impressive surfing from the Aussie girls both at home and on social media so it will be so good to catch up and challenge each other once again, especially at Straddie and Margaret River, I think they’re both great locations. Running these events is a harder task than ever right now, especially for such a global sport, so it’s encouraging to see how hard the WSL is working in their regional areas to get things back on track for their surfers and fans.”

The series will see 24 of Australia’s best surfers (12 men and 12 women) go head to head in their respective divisions with 11 male CT competitors and 8 female CT competitors on standby for each stop, some looking to compete for the first time in 2020. The remaining spots in each field will be allocated to the highest ranked 2019 non-qualifying Australian surfers or selected wildcard surfers.

After taking out the Newcastle Surfest Qualifying Series event earlier this year, current world No.11 Julian Wilson (AUS) is looking forward to testing himself against the best once again at two of his favourite locations in Australia.

“Good luck finding a surfer that doesn’t daydream about scoring one of those perfect South Straddie days,” Wilson said. “Having a window to pick a 2-day event window is ideal, this is going to be fun. Anytime we get to have a WSL event at a location where we all want to go for a surfing trip anyway, is something to look forward to! West Aus has so much to offer in terms of wave varieties and whether it’s big or small it always packs a punch and offers an opportunity for us to perform.”

The Australian Grand Slam of Surfing will play a part of The WSL Countdown that will see a series of regional, pre-season exhibition events in the USA, France and Portugal, and of course, Australia, utilising CT competitors from each of those regions. These events will help prepare competitors for the much anticipated 2021 season and their 2021 Olympic debut.

“The Australian Grand Slam of Surfing is a huge step in getting live, professional surfing back for everyone in 2020 – our fans, our surfers and all of our partners,” said WSL Asia Pacific General Manager Andrew Stark. “The extremely challenging situation we have all faced in 2020 is one that requires flexibility and agility and we believe we’ve developed the best option for all stakeholders involved to see live surfing competition return to the ocean this year. We would like to sincerely thank and acknowledge our partners for this year’s Australian Grand Slam of Surfing for making this a reality.”

Continuing their strong support of professional surfing is Boost Mobile who has come on as the naming rights sponsor for the Gold Coast event at South Stradbroke Island.

“Boost Mobile is proud to continue our partnership with the World Surf League,” said Boost Mobile General Manager Jason Haynes. “In these hard times, The Australian Grand Slam of Surfing is an innovative way to bring world-class surfing back to the fans not only in Australia but globally and Boost likes the opportunity to be a part of this innovation. Boost mobile is on the biggest network in the country so it gives our customers the ability to watch the Australian Grand Slam and the Boost Mobile Pro Gold Coast from almost anywhere.”

Each location will see the clock wound back with a series of ‘Heritage’ and ‘Locals best of the best’ heats contested by some of surfing’s most iconic names.

The World Surf League will be working closely with the local North End Boardriders Club on the Gold Coast, who call South Straddie home and been awarded one men’s (Chris Bennetts) and one women’s wildcard spot (Sayalea Muramatsu) into the main event at the Boost Mobile Pro Gold Coast.

The super consistent South Stradbroke Island, as opposed to other Gold Coast surfing locations, was chosen as the most suitable location in order to deliver this specialty event as a broadcast-only non-spectator event and to fit in with the current COVID-19 related public gathering and health and safety policies.

“Events like the Australian Grand Slam of Surfing would play an important role in the state’s economic recovery,” Queensland’s Tourism Minister Kate Jones said. “Because Queenslanders have done such a great job-fighting COVID-19, we can now welcome tourists back to our state. Minjerribah – or South Straddie – is one of the most beautiful places in the world to visit and this event will provide extensive exposure, giving visitors another reason to book a trip. Only the Palaszczuk Government has a plan to rebuild our economy and create local jobs. Events like this that support local businesses and local jobs are crucial to that strategy.”

“Surfing is in our DNA. It’s wonderful that despite COVID-19 we are still able to host an event with some of the biggest names in surfing,” said Gold Coast Mayor Tom Tate. “South Straddie is the perfect venue and any events held here can only boost the economy. This innovation by the WSL to hold the event like this is exactly the kind of thinking we need to get us through these times.”

For the Margaret River Pro, Australian surfing legend Taj Burrow has accepted a wildcard in the men’s draw, and Jake Paterson and Dave Macaulay will compete in a Heritage heat, while a locals Best of the Best Heat will be run with the local surfers to be confirmed via a local trials event run by Surfing Western Australia. A WA female will also be awarded a wildcard place in the main women’s draw.

“Margaret River is one of Australia’s top travel destinations, and this event would present a terrific opportunity to market WA’s South West region to the world,” said Tourism Western Australia Managing Director Brodie Carr. “Surfers are naturally great travellers who are constantly seeking out new waves and new adventures and Western Australia offers this in bucket loads,” Carr said. “There are endless surf breaks, wineries and other experiences ready to be discovered.”

The Australian Grand Slam of Surfing will run across the nation between September 1 and October 31st and be broadcast live on all WSL Channels including worldsurfleague.com and the WSL Facebook page, Channel 7 (7Plus) and Fox Sports Australia including Kayo.

Australia’s leading online bookmakers are expected to have surfing betting markets for all events up later this week.