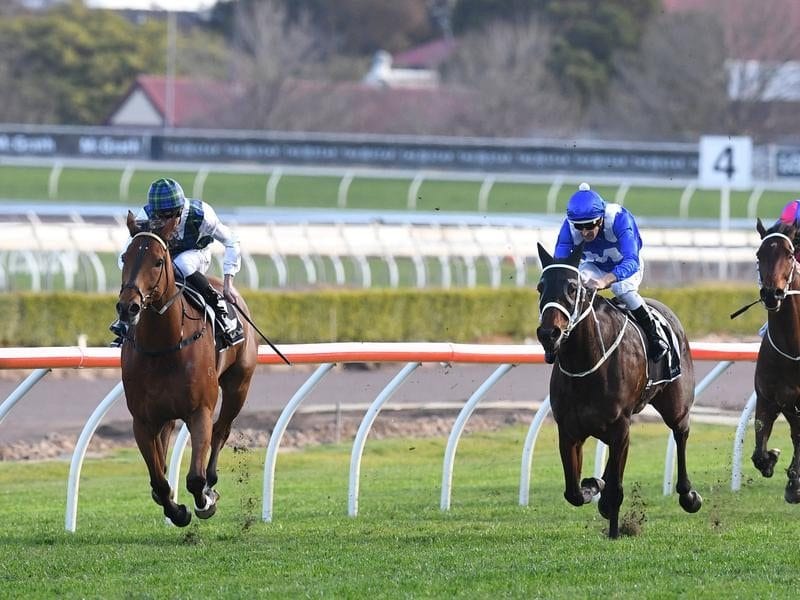 Red Excitement (left) will be among Winx’s rivals again in the George Main Stakes at Randwick.

Whether there will be a repeat of the tactics used by Red Excitement in the Chelmsford Stakes to try to topple Winx in the George Main Stakes remains to be seen.

Red Excitement stretched out to a 10-length lead at one part of the Chelmsford and Winx had to call on all her champion qualities to run him down.

Trainer Gerald Ryan and jockey Josh Parr almost pulled off the biggest racing upset for years but in the end the margin between the two was a comfortable one length.

“This is a different race and I’ll wait until after acceptances when we see the make-up of the field before deciding what we will do,” Ryan said.

“Red Excitement doesn’t have to lead. He has shown before he can sit off the leader.”

Winx has opened at $1.10 to record her 20th successive win and her first Group One victory of the spring in a campaign targeted at a record-equalling third Cox Plate.

Le Romain has also been entered for the Group One Makybe Diva Stakes (1600m) at Flemington where he is a $9 chance with Godolphin’s Hartnell the $1.80 favourite.

Although Winx had to work to beat Red Excitement, her trainer Chris Waller believes that showed just what good form she is in.

She will again wear ear muffs during the race rather than have them taken off in the barrier as has happened in all her starts bar her most recent.

Le Romain’s trainer Kris Lees has also entered Invincible Gem who is also nominated for the Cameron Handicap and Tibbie Stakes at her local Newcastle feature meeting on Friday.

Invincible Gem ran third in the Group Two Tramway (1400m) behind Happy Clapper and the Waller-trained Tom Melbourne who is entered for the George Main along with stablemates Foxplay, Mackintosh and McCreeery.