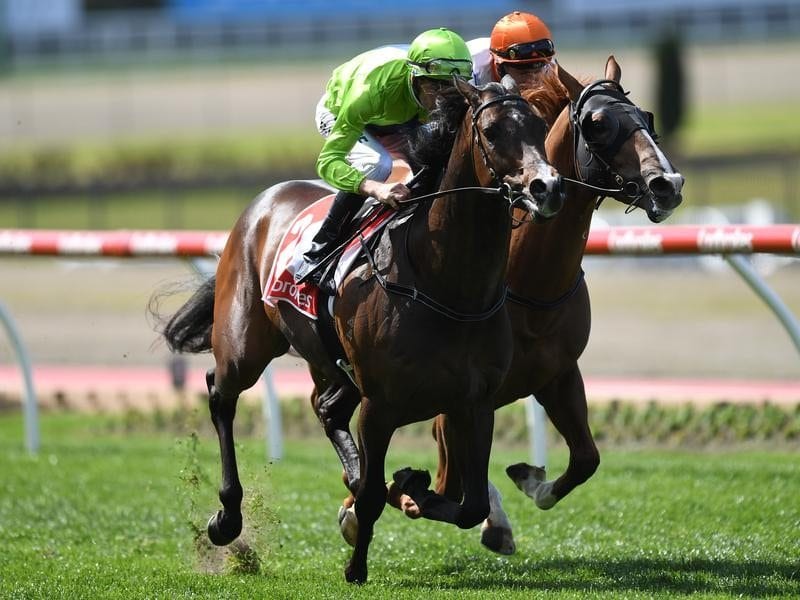 Royal Symphony (left) has again been sharpened up in a race day gallop ahead of his return.

Unbeaten three-year-old Royal Symphony puts his Caulfield Guineas favouritism on the line in his spring return at Flemington.

After winning at Pakenham on debut, Royal Symphony scored back-to-back victories at Flemington, the latest over 1600m.

Following that win on July 8, Royal Symphony was installed the Caulfield Guineas favourite and still heads that market at $5.50 ahead of Merchant Navy at $7 with Esperance and Pariah at $9.

Catchy, Invader and Kementari are on the next line at $13.

Esperance has also been nominated for the Exford Plate as well as the Group Two Danehill Stakes for which Catchy is also entered.

Royal Symphony has galloped between races at the past two Saturday meetings at Caulfield and Moonee Valey and has pleased both McEvoy and rider Dwayne Dunn.

Dunn’s wife Amanda part-owns the three-year-old and the jockey was was facing a difficult choice whether to ride Royal Symphony in the Guineas on October 14 or Chautauqua in The Everest at Randwick on the same day.

That decision was last week taken out of his hands with the announcement Brenton Avdulla would ride Chautauqua.

Dunn said the exhibition gallops had been similar for Royal Symphony.

“I’ve only seen him on race day at full throttle so it’s a little hard to line him up, but he’s been getting the job done.

“We’re still a long way away from his grand final and we’d like to keep him unbeaten if we can, but there’s still plenty of improvement.”