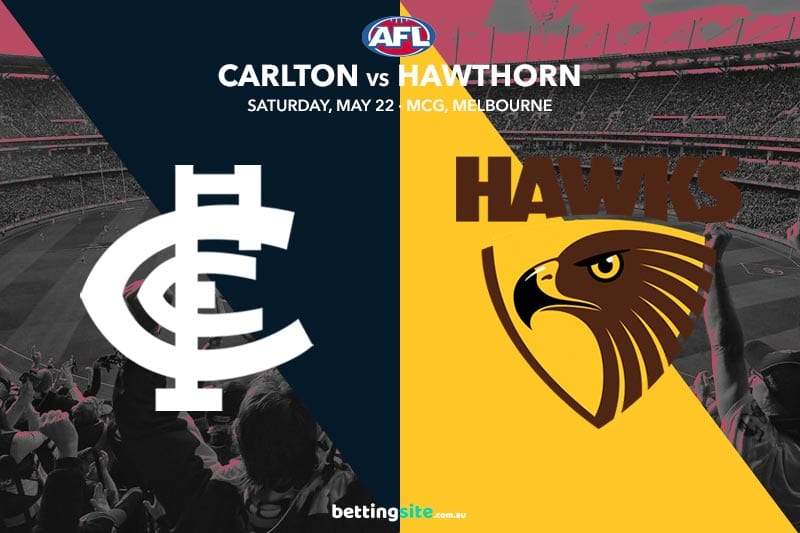 Carlton will be looking to avoid a third consecutive defeat when they face Hawthorn at the MCG on Saturday afternoon in Round 10 of the 2021 AFL Premiership season.

The Blues enter the match sitting in 13th position on the AFL ladder but have shown plenty this season to suggest they should account for a rebuilding Hawks side. Carlton were rocked during the week when David Cuningham (ACL) was ruled out for the season, but they should welcome back Jack Silvagni (concussion) as a like-for-like replacement.

For the second year in a row, it was Hawthorn that became the first team to lose to a side that was yet to win a game. Hawks fans will be hoping they see the return of Shaun Burgoyne (ankle), as the Hawks lacked the silk required to get the four points against a hungrier North Melbourne outfit last weekend.

AFL bookmakers have made Carlton red-hot favourites at $1.31, leaving Hawthorn as $3.60 outsiders as they look to bounce back from last round’s horror loss.

The Blues simply could not go with the top-of-the-ladder Demons last weekend but were gallant in defeat, going down by 26 points in the end. However, Carlton fans have put up with gallant defeats for long enough. Harry McKay was down on his recent form with a shoulder injury clearly hampering him, yet the Coleman Medal leader still managed three goals. He lacked support from his small forwards, but expect a big response from Eddie Betts, Matthew Owies and the like this weekend.

Hawthorn were outclassed in the second half by a Kangaroos team that has lacked polish all season. The Hawks are sitting in 17th position on the ladder, and except for a few big individual performances, they haven’t shown too much over the first nine rounds. They have some top-class midfield talent with Jaeger O’Meara, Tom Mitchell and Chad Wingard, but there is big drop in quality outside of those three stars.

Zac Williams has struggled to recapture his form of the 2019 finals series over the past 18 months, and it has been evident in his first six games as a Blue. Chad Wingard, on the other hand, has had his best start to a season as a Hawk. With more time in the midfield, Wingard has added a bit of spark to an engine room that needed an X-factor. With 21 touches and two goals last week against North, Wingard showed the Hawks faithful what he is capable of. Williams has been averaging just 18 touches as a full-time mid, which is nowhere near the output expected of a player on such a lucrative contract.

Carlton to win by 40+ points

If Carlton want to be taken at all seriously, they simply must put a big margin on Hawthorn. It is expected to be a perfect day for footy on Saturday, and with the likes of Harry McKay and a plethora of small forwards, the Blues look to have too many avenues to goal for Hawthorn to cover. When these two teams last met in the Perth hub last year, it was Hawthorn who put a space on Carlton. Fast forward to 2021, and it should be the other way around.

Plenty of people wrote off Eddie Betts after the first month of footy this year, but the livewire small forward is back in business. Eddie has kicked nine goals in the past three weeks, and despite kicking 1.3 against Melbourne he looked dangerous throughout the day. He comes up against a Hawthorn side lacking a lockdown defender on small forwards, so we could be set for another ‘Eddie Show’ on Saturday. Online bookies are paying up to $3.30 for Betts to kick three or more goals, and it looks one of the best bets of the weekend in any sporting code.

Carlton come to the MCG on Saturday with a chance to really put Hawthorn to the sword by a big margin. Led by the small forwards in Eddie Betts and Matthew Owies, they should have too many answers for what Hawthorn pose. We also expect Zac Williams to have one of his better games in the navy blue.