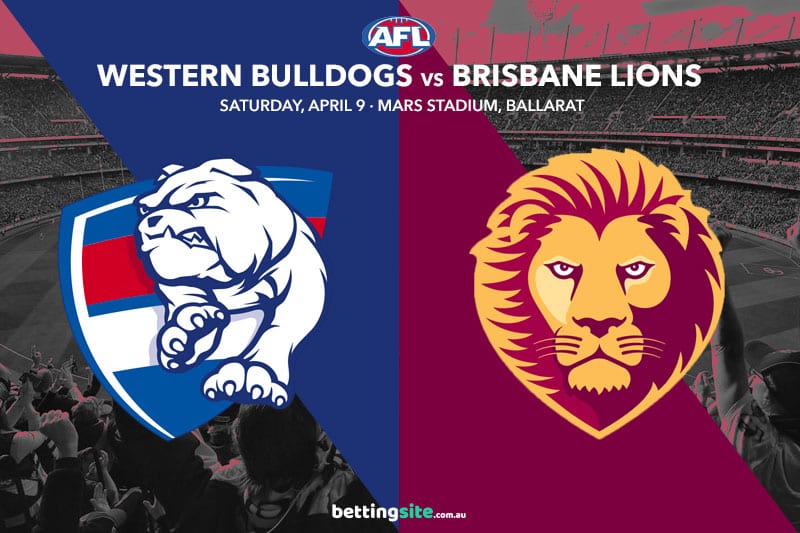 Following their magical victory last week, the Brisbane Lions will now take on the Western Bulldogs at Ballarat this Saturday in round four of the 2021 AFL Premiership.

Not only did the Lions win by a kick after the siren last week, they did so while being forced to stay in Melbourne following a snap lockdown in their home state of Queensland.

The Lions still have not flown home, but they have enjoyed training in Melbourne and will offer no excuses as they go hunting for their second win of the season.

There may not be a team as dangerous as the Doggies, who kicked 25 goals – 10 of which came from the boot of Josh Bruce – in a 128-point mauling of North Melbourne on Good Friday.

The key forwards for the Western Bulldogs have started the season in excellent form, and it will be a tough task for Harris Andrews and young Jack Payne to keep them quiet this weekend. Payne has only eight games of top-flight footy under his belt, so the Doggies’ midfielders may well look to target his direct opponent.

As we have stated in all three of the Bulldogs’ matches this season, you need to look out for their midfielders, as they have put together half a dozen of the best ball-winners in the league. Almost every player in the Doggies’ midfield can get 30 disposals on any given day, especially if Oscar McInerney does not return for the Lions in the ruck.

The Lions have progressively scored fewer points every week this season, and that trend could continue this weekend against a side that boasts the best defensive record in the AFL at the moment. Joe Daniher and Eric Hipwood have looked better and better with each passing week, but they will have to be on top form to break down the Bulldogs’ backline.

Jack Macrae to get 40+ disposals
An unbelievable stat we cannot comprehend is that Jack Macrae is averaging 40 disposals across his last four clashes with the Lions, including his two career-highs of 47 and 45. Having notched up 41 touches against the Eagles in round two, Macrae’s numbers are not dropping despite the addition of Adam Treloar to the midfield.

Western Bulldogs -11.5
Even though North Melbourne is clearly the worst side in the AFL, the Bulldogs still put the Kangaroos away by 128 points. The new rule changes are clearly working well for the Doggies, who should get the better of a Lions outfit that has not been home in weeks.

The inclusion of Stefan Martin in the ruck has allowed the Dogs to rest Tim English up forward, where he has booted five goals in three games. The Lions may be without Oscar McInerney for another week as he recovers from an ankle injury, but either way, the Bulldogs should emerge as the better side this Saturday in Ballarat.